Follows failed 2009 attempt to run for NYC mayor, when he dropped out early after complaining about the amount of bureaucracy involved.

By ASSOCIATED PRESS
OCTOBER 5, 2010 18:16
311_naked cowboy
(photo credit: From www.nakedcowboy.com)
Advertisement
NEW YORK — New York City's most famous cowboy has been seized by naked ambition.Robert Burck, known far and wide as the Naked Cowboy, intends to announce on Wednesday that he plans to enter the 2012 presidential race.RELATED:
Pelosi: I fully expect to be speaker 5 weeks from now
Emanuel to run for Chicago mayor; replaced by RouseBurck is a tourist attraction known for strumming his guitar in Times Square while wearing only white underwear, boots and a cowboy hat. 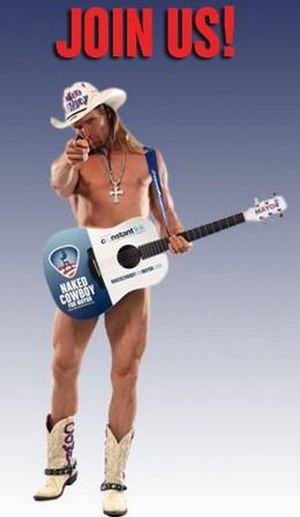 It's not his first time around the political block.Burck had barely entered the mayoral race when he dropped out in 2009, complaining about the amount of bureaucracy involved.On Monday, real estate magnate Donald Trump denied sending a poll to New Hampshire residents about a possible run for the Republican nomination, but in a Monday interview with Time magazine, he sounded like a candidate.The survey asked New Hampshire residents 30 questions about Trump, his past donations to Democrats, and his reality TV show, and whether they would hurt or help him in a possible political campaign."I've never had any interest [in running for office] before," Trump explained. "If I ever did, this would be the time...because we've never had a country that's sunk and that's gone to levels as low as it is right now. We're getting that inferiority complex, which we've never had.""If I were interested, I'd be a Republican," the real estate developer told Time. "They have a chance to make a big difference [after the midterms]. The last time, they blew it."
Advertisement
Subscribe for our daily newsletter