By E.B. SOLOMONT, JERUSALEM POST CORRESPONDENT
FEBRUARY 27, 2010 08:17
operation cast lead
(photo credit: Associated Press)
Advertisement
WASHINGTON – Israel and the Palestinians have five more months to investigate their actions during Operation Cast Lead or face “further action” by UN bodies, following a vote by the UN General Assembly on Friday.Ensuring the matter will stay on the UN agenda, the Palestinian-drafted resolution – officially introduced by Qatar but supported by a coalition of more than 20 Arab states – was adopted by 98 to 7, with 31 abstentions.According to the resolution, Secretary-General Ban Ki-moon is to submit a report to the General Assembly within five months, with the possibility of referring the matter to other UN bodies, including the Security Council. A spokesman for Ban on Friday said the secretary-general was asked to produce another report, and would do so.In a speech before the General Assembly, Israeli Ambassador Gabriela Shalev defended Israel’s right to defend its citizens against “asymmetric warfare” and terrorists who use human shields.“As Israel faces this existential threat, we remain committed to acting in accordance with international law and the law of armed conflict,” she said.In the aftermath of Operation Cast Lead, Israel launched independent and credible investigations, details of which were submitted to the United Nations in a 46-page report to Ban, she said. “On the other hand, the Palestinian submission to the secretary-general cannot genuinely address the conflict between the State of Israel and the Hamas terrorist entity.”Asking, “Who exactly is the ‘Palestinian side’” responsible for investigations, Shalev cast doubt on the ability of the Palestinian Authority to investigate in Gaza. And, she added, “Do we really believe that the terrorist Hamas organization will investigate its use of human shields, its appalling methods of targeting civilians, and its cynical use of schools, hospitals and mosques as weapons of terror?”Privately, Israeli officials said the resolution simply extended a process and investigations they intended to carry out in any case. “It prolongs and expands something that would happen anyway,” a senior Israeli diplomat said. “Israel is doing those investigations with no relation and regardless of any UN process. We are doing it, we will continue doing it, we don’t need reminders, this resolution does not change anything.”Israeli officials said the wording of the resolution became more moderate in the days leading up to Friday’s vote.The final version calls upon Israel to “conduct investigations that are independent, credible and in conformity with international standards into the serious violations of international humanitarian and international human rights law reported by the [Goldstone] Fact-Finding Mission, towards ensuring accountability and justice.” 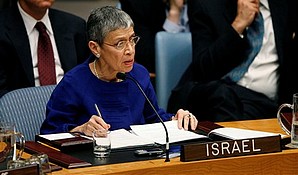 It also urged the Palestinian side to investigate and asks Ban to report to the Assembly within five months, “with a view to the consideration of further action, if necessary, by the relevant United Nations organs and bodies, including the Security Council.”Riyad Mansour, the Palestinian observer, called the vote a “victory to the victims of the Palestinian people and victory to international humanitarian law.”In November, the General Assembly gave both sides three months to carry out “credible investigations” and asked Ban to report back on implementation. But in his report, submitted on February 4, Ban did not assess whether the Israelis or Palestinians had done so.Friday’s resolution marked a shift in how the Europeans voted. EU countries, which were divided in November, were more supportive of the new measure. No EU country voted “no” and Britain, France and Spain voted “yes.”Sir Mark Lyall Grant, the permanent representative of Britain, said the Palestinian delegation was responsive to concerns raised in the days before the vote. “We have consistently called for full, credible and impartial investigations into the allegations in the Goldstone Report on the conduct of both parties during that conflict,” he told reporters in New York. “That is what this resolution calls for, and that is why have voted for it.”The US, which opposed the Goldstone Report, voted against the resolution. “The issues raised by this resolution that are related to last year’s conflict in Gaza should be resolved by credible domestic investigations and their follow-up,” said US Ambassador Alejandro D. Wolff, the deputy permanent representative to the UN.Wolff called the Goldstone Report “deeply flawed,” and cited anunbalanced focus on Israel, negative inferences drawn about Israel’sintentions and a failure to assign responsibility to Hamas.“The resolution we have just voted reflects several of the same problems as the predecessor it recalls,” he said.
Advertisement
Subscribe for our daily newsletter