By JPOST.COM STAFF
AUGUST 5, 2010 14:13
Holocaust lie website screenshot
(photo credit: Courtesy)
Advertisement
An Iranian website calling the Holocaust "the great lie" and depicting an alternative version of events in Jewish history in cartoon form has been launched.The site is reportedly financed by a cultural foundation, is not government affiliated, and is based mainly on a book of cartoons first published in 2008.RELATED:
Europe ignores Iran's deadly mix of anti-Semitism and nukes
Dozens of countries fight anti-SemitismThe site's creators say that they intend to show the world that the Holocaust has been entirely fabricated by the Jews, who not only invented it but have used it to their advantage ever since.The book's preface begins by saying that the its purpose is "to denounce the conspicuous lie of the planned murder of 6 million Jews during the Second World War allegedly called 'Holocaust.'"It continues, calling the Holocaust: "The lie by which the Palestine occupier Zionists have justified their occupying of Palestine and lots of their crimes for years."Turning the pages of the book by clicking on icons depicting a swastika, the reader is told 'a story' of the plight of the Jewish people, from before the Second World War onwards.Each page has text accompanied by a cartoon, and uses derogatory, offensive and blatantly anti-Semitic imagery and language. 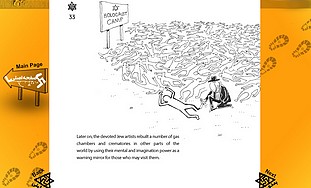 It describes how the Jews 'fabricated' the existence of the gas chambers, using them to garner the world's sympathy with a view to receiving money for the trials they had endured, saying:"Later on, the devoted Jew artists rebuilt a number of gas chambers and crematories in other parts of the world by using their mental and imagination power."It also accuses the 'Zionist Jews' of storing enough atomic weapons to "destroy the entire world."Several years ago Iranian President Mahmoud Ahmadinejad famously made headlines after calling the Holocaust 'a fairytale'.Yad Vashem commented Thursday saying that the launch of the website is yet the latest salvo emanating from Iran that denies the facts of the Holocaust and attempts to influence those who are ignorant of history."The vulgar and cynical approach of the website, a combination of Holocaust denial and distortion, illustrated with antisemitic caricatures, further illustrates Iran’s disregard for reality and truth vis-à-vis the Holocaust, Jews and Israel," the Yad Vashem comment continued.
Advertisement
Subscribe for our daily newsletter