Canines, and their owners, enjoy the country’s first-ever ‘Dog Day’

Most of the animals at the event milled around nonchalantly, both running free in the dog park and socializing on leashes as their owners explored the booths. 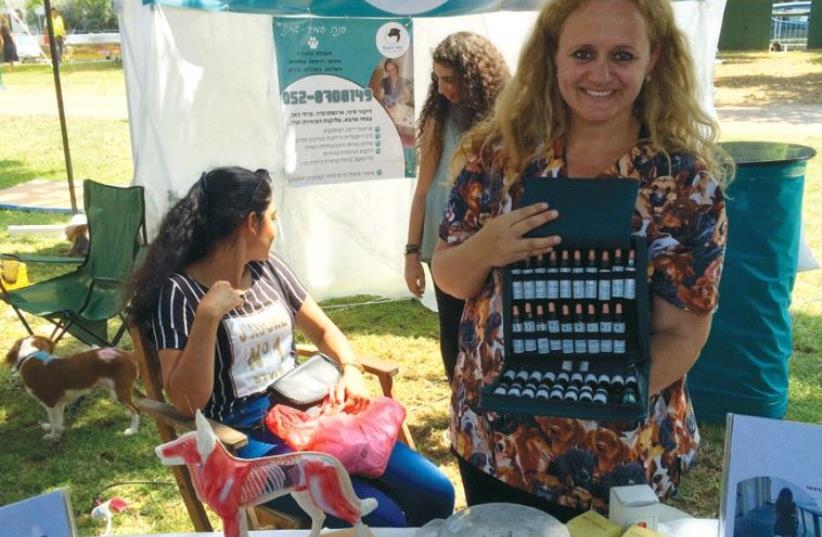 ANAT AMIR-AMANO, an expert in medicines and therapies for pets, displays some of her remedies for anxious dogs and cats during Tel Aviv’s ‘Dog Day’ on Friday.
(photo credit: SHARON UDASIN)
Advertisement
Along the banks of the Yarkon River on a muggy Friday afternoon, hundreds of canines converged on the sandy Bnei Dan Dog Park, where they lounged at a popup massage parlor, sniffed out naturopathic remedies for anxiety and consumed perfectly packaged pieces of doggy sushi.The dogs, alongside their owners, happily licked the legs of passersby and woofed with delight during “Kelaviv – Tel Aviv Dog Day,” a first-of-its kind festival in Israel in “the friendliest city in the world for dogs.”The self-proclaimed title stems from Tel Aviv-Jaffa’s position as the city with the highest ratio of dogs per capita around the globe – with one dog for every 17 residents, according to the municipality.From noon until 7 p.m., business owners showed off their wares in a ring of booths surrounding a grassy picnic area, adjacent to the enclosed dog park. Among the displays were smartphone applications devoted to dog-related needs, canine homeopathy specialists, training specialists, vintage style pet furniture and bedazzled bowls and collars.In addition, an adoption center sponsored by the municipal dog shelter, alongside the Let Animals Live and SOS organizations, was open for the day in the park.Most of the animals at the event milled around nonchalantly, both running free in the dog park and socializing on leashes as their owners explored the booths. Yet while Friday served as a happy festival to celebrate canines, one vendor reminded The Jerusalem Post that dogs are also capable of experiencing depression and anxiety.Anat Amir-Amano, an expert in complementary medicine and CEO of Sod Hamahat, specializes in acupuncture, floral extract and leech therapy for pets. Anxious dogs and cats can achieve calm, according to Amir-Amano, by undergoing acupuncture or sipping a variety of Bach Flower Remedies – solutions of water, brandy and floral extracts – that she offers from their water bowls.She employs flower remedies in situations such as “if a dog is depressed, afraid to go to the vet, afraid of cars,” she explained.“First you have to believe that the animals have emotions,” said Amir-Amano, who also teaches a course on the subject at the Wingate Institute for Physical Education and Sports.For a particularly nervous dog that she recently treated – an animal that had been adopted from a shelter – Amir-Amano observed that using the remedies worked wonders.“Now the owners came and said that she [the dog] lets us pet her,” she said.For each customer, she explained that she sits with the owner in order to learn about the animal’s specific behaviors.Then, she assesses the right mix of the 38 varieties of remedies available.“Every pet has a different story,” she said. “I make a special bottle for each animal.”As far as acupuncture is concerned, Amir-Amano said that she uses this type of therapy for joint infections, herniated discs and paralysis. Typically, the owner holds the dog or cat for the first few minutes as she inserts the needles, after which the animal completely relaxes, she explained.Leeches, which were swimming in a fish bowl on her Dog Day table, are useful for treating blood clots in the ears of dogs, Amir-Amano said.While Amir-Amano mostly focused on canine and feline mental health, a few booths down, another entrepreneur was promoting physical fitness for dogs.Arie Schwartz, CEO of Dofunit, was exhibiting a two-wheeled, lightweight cart similar to a horse sulky, except with one large dorsal shaft rather than two side shafts, and thick mountain bike tires. Built like a seesaw, the Dofunit allows the dog to pull the cart with the owner in the seat – as the seat goes down, the shaft that hovers over the dog’s shoulders goes up.“It never sits on the dog,” Schwartz explained.According to Schwartz the purpose of the Dofunit is twofold: a sporting activity for both the dog and the rider, and type of animal assisted therapy for children and other patients.“With this tool, they can do the whole process. They get acquainted with the dog, train the dog and ride with the dog,” he said.“At the end of the process, the child and the dog are one team and the dog makes the ultimate effort for the child.”Meanwhile, the dog is able to exercise and feel in control, as he leads the rider wherever they are traveling, Schwartz explained.“It gives him a big mental advantage,” he said. “He is the boss – he has a function, responsibility, a mission to do. He leads at his speed.”The canines at the Tel Aviv Dog Day also appeared happy to lead their owners around the grounds, despite the hot and humid weather.As they walked in and out of the event, along a path lined in red carpet, participants were greeted by portraits of Knesset members with their dogs and cats – perhaps a testament to a countrywide fondness of four-legged friends that crosses party lines.Tel Aviv’s 25,000 dogs enjoy a total of 70 public dog parks, or 1.3 parks per square kilometer, as well as specific beaches where they can roam freely, a statement from the city said. The municipality features a no-kill shelter, treats homeless animals around the clock, responds to animal abuse complaints and hosts a variety of events geared toward dogs.“The city is a leader in the country and around the world in urban animal welfare policy and invests heavily in the treatment of animals,” the statement said. “The municipal shelter was already declared more than a decade ago a refuge for the promotion of a no-kill policy, open to volunteers from the public who assist with the welfare of the animals and with finding them both permanent and temporary loving homes.“One of the main goals of the dog festival is to strengthen the community and the relationship among people by means of meetings with dogs,” the statement added.