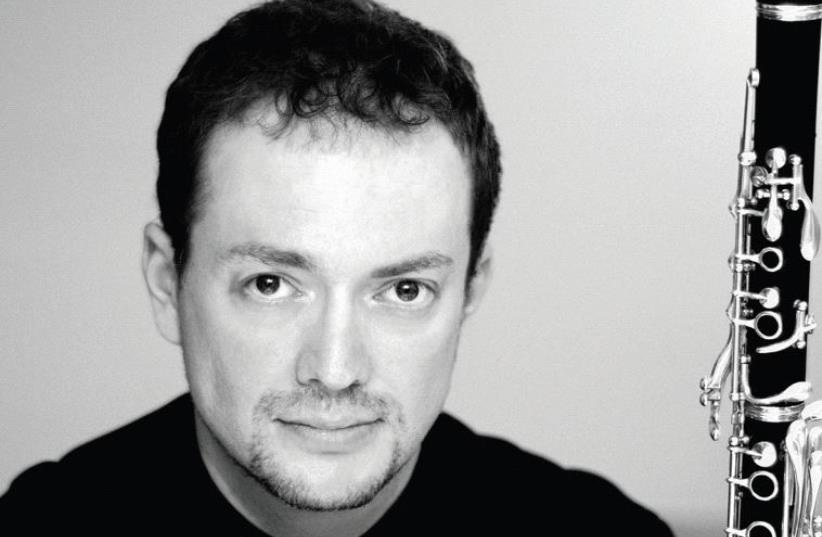 Clarinetist Anton Dressler
(photo credit: INGRID FLITER)
Advertisement
The opening concert of the Ra’anana Symphonette Orchestra offers a program that is anything but banal. The soloist, renowned Italian-based, Russian-born clarinetist Anton Dressler, is a musician of diverse interests. He is described by the Italian media as a clarinetist of “spellbinding sensibility” with a “superb intonation, a unique sense of intimacy.”He has performed on many prestigious world stages with a wide array of acclaimed musicians and orchestras. In addition, composers such as Uri Brener, Efrem Podgaits, Mikhail Bronner, Alexander Rosenblatt, Eugene Halperin and Alexander Tchaikovsky have dedicated compositions to him.In a phone interview from his home, Dressler, 42, says that for him, the son of a musicologist mother, the choice of profession was almost predestined. His father was a rocket engineer, “a person of wide interests.”“I always liked music. In my childhood, I suffered from asthma, and a doctor suggested that I should play some wind instrument. I started with a block flute. And then I got the LP Peter and the Wolf by Prokofiev on one side, with clarinet solos of the cat, and Britten’s Guide to the Orchestra on the other and fell in love with the instrument,” he recounts.His mother later married wellknown pianist Boris Petrushansky. In 1991, the latter was offered a position at the Piano Academy in Imola, and the family moved to Italy.“I continued my studies in Bologna, graduating from both the Moscow Conservatory and the Music Academy of Bologna at the same time,” he says.Dressler, who speaks Russian with a slight Italian intonation, describes his Italian experience as thrilling.“Although there are things that probably should be changed in the local educational system, how can I describe my feelings when, asking at the library for the score of Rossini’s piece, I was given the original? Or rehearsing or playing at La Scala?” he marvels.Dressler’s musical interests are not limited to the traditional repertoire.“Quite a few pieces have been written for clarinet, but still the repertoire is less than that of, say, piano. A pianist can become a specialist in Beethoven, playing his music for his entire life and it will be perfectly OK. With the clarinet, it’s is different,” he says.Dressler plays contemporary music, often written especially for him, live electronic music, jazz and also klezmer.“I want to try it all,” he says.The program for the Ra’anana Symphonette’s opening concert features two pieces by Mendelssohn: Fair Melusina, Overture in F Major, Op. 32 and Symphony No. 3 in A Minor, Op. 56 (“Scottish”). Dressler will perform two pieces. The first, Danze Popolari Immaginarie, was written recently by Italian composer Giampaolo Testoni.“This is a 25-minute piece. I got to learn it while it was being composed. This is a very harmonic piece. It is more a dialogue between clarinet and orchestra than a concerto for clarinet. In fact, there are no soloists here. I also play a bass clarinet in this piece. As far as I can see, the composer relates to sound as if it was color, which makes the piece even richer. I am looking forward to performing it. I also liked the idea of the piece. Nowadays, it is not simple to compose anything new in the field of the folk dance music,” he says.Dressler adds, “There’s nothing to be afraid of. Even though the music was written here and now, the audience will enjoy it. It is a kind and listener-friendly piece, so to speak.”In addition, Dressler will perform his own piece called Livemovement – a clarinet improvisation with live electronics. Italian maestro Carlo Goldstein will conduct.On the whole, the season program is composed of concerts that will suit the most demanding music lover. Some of the top local and international soloists and conductors will participate.October 29 and 30 at 8 p.m. at The Performing Arts Center, Rana’ana. Tel: (09) 7457773. For the full season program, visit http://www.symphonette.co.il/