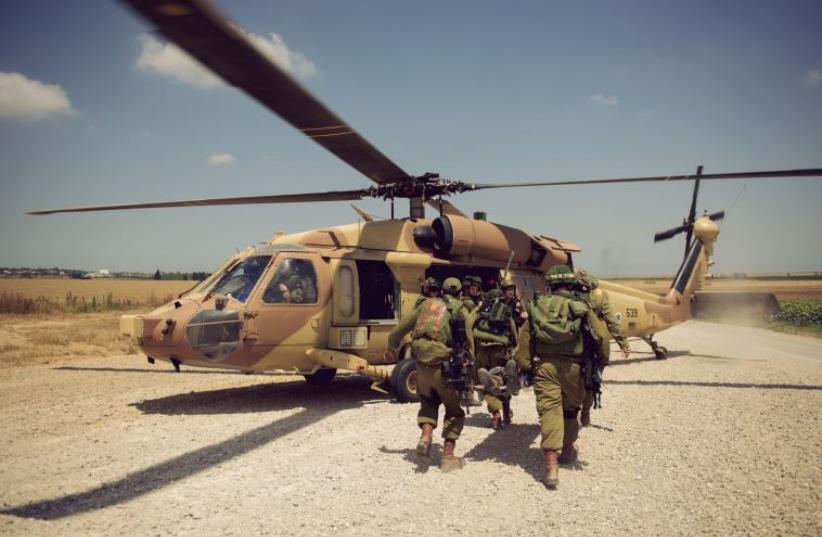 IDF soldiers in the Paratrooper Brigades take part in an evacuation drill
(photo credit: IDF SPOKESPERSON'S UNIT)
Advertisement
An IDF paratrooper on Monday was sentenced by an IDF court to a mere 45 days of community service and a demotion in rank for killing a Palestinian during the Gaza border protests in November 2018.
According to KAN news, the relatively light sentence came due to the refusal of the Palestinians to allow the IDF to perform an autopsy as well as the tense operational situation at the time.
Reportedly, three Palestinians approached the border fence, but then started to run away.
The IDF paratrooper, who was convicted of merely violating the rules of engagement and not the more severe crimes of manslaughter or negligent homicide, shot one of the Palestinians as he was running away.
Under the rules of engagement, soldiers were not supposed to fire on Palestinians who were fleeing the border fence and, in general, needed approval from their immediate commander (which he was not given) to open fire.
Despite the soldier’s misconduct, the situation was considered complex and operational since the three Palestinians had acted aggressively and had entered an area where there was authority to fire on them.
Put differently, the soldier might not have been prosecuted if he had shot the Palestinian a few moments earlier, before the Palestinian started to flee.
For significant parts of 2018-2019, there was an ongoing series of protests mixing non-violent and violent demonstrators by Palestinians on the Gaza border, in which over 300 Palestinians were killed.
While some protests passed without serious injuries, others involved shooting and plastic explosives from the Palestinian side, leading to sometimes lethal fire from the Israeli side.
During the period, there were also a couple dozen incidents in which Palestinians were killed by apparent error or violations of the rules of engagement by IDF soldiers.
Monday’s decision is only the second conviction and sentencing coming out of the conflict, with the first being an October conviction of another soldier for violating the rules of engagement, and being sent to prison for one month.
The International Criminal Court Prosecution has said that it wishes to review whether the IDF has properly probed the 2018-2019 incidents of Palestinians killed by IDF soldiers.
Israel has opposed ICC involvement saying it has no jurisdiction over Israeli actions.