IDF to demolish building of family of Palestinian who killed soldier 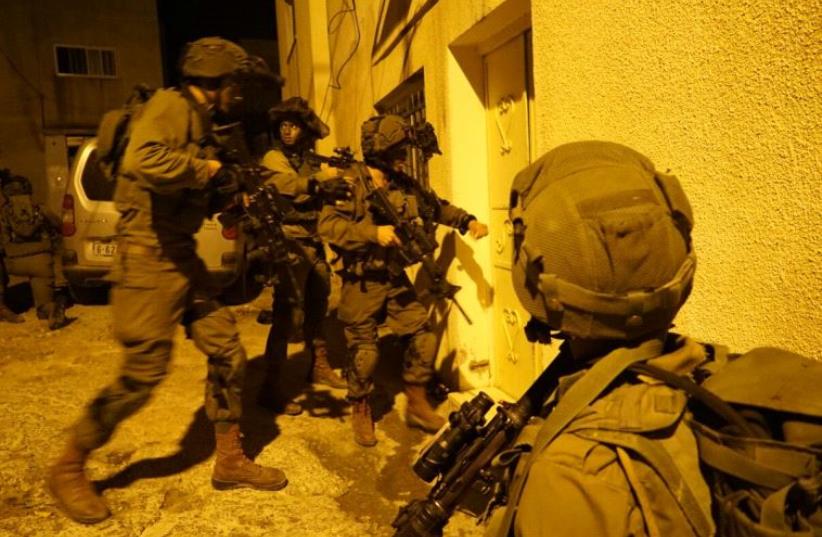 IDF forces raid home of terrorist.
(photo credit: IDF SPOKESMAN’S UNIT)
Advertisement
The IDF has issued a demolition order for the entire four-story building inhabited by the family of a Palestinian who killed Ronen Lubarsky, 20, during a raid in late May, the IDF Spokesperson’s Unit announced. The Rehovot resident, a commando with the elite Duvdevan unit, died May 27 two days after an 18-kg marble slab was dropped on his head from a rooftop during an operation in the al-Am’ari refugee camp near Ramallah. Lubarsky was posthumously promoted to staff sergeant.The family of 32-year-old Islam Yousef Abu Hamid had previously been informed the IDF intended to destroy two floors of the building three weeks ago. It has now been notified the entire structure will be bulldozed.The IDF noted that the home was erected on a plot where a building was demolished in the 1990s, following an attack by Hamid’s brother which killed Shin Bet (Israel Security Agency) officer Noam Cohen.Cohen was killed during a security operation in Ramallah on February 13, 1994, when three Hamas operatives opened fire with automatic weapons on the car he was traveling in at the Beitunya junction. Notwithstanding that the vehicle was hit by 62 bullets, Cohen managed to exit the car and  return fire. Critically wounded, he subsequently died.Following the initial demolition, the family was ordered not to rebuild the structure.
“The family was not allowed to rebuild the building, and now the IDF has decided to demolish the entire new building that was built,” read the IDF statement.According to the Shin Bet, Hamid was imprisoned from 2004 to 2009 for Hamas terrorist activities.Lubarsky was part of the covering force in an operation to arrest members of a terrorist cell involved in recent shooting attacks. After being struck by the marble slab thrown by Hamid, he received emergency medical attention in the field and was transferred to intensive care at Hadassah University Medical Center in Jerusalem’s Ein Kerem, where he succumbed to his wounds.A controversial tactic, Israeli officials say home demolitions are a key deterrent to stop other potential attackers. But Palestinians and human rights groups criticize the army for using collective punishment by demolishing the homes of a terrorist’s families.According to the IDF, 35 homes were demolished while five others were sealed between 2015 and 2017. As of August 2018, four homes have been demolished this year and one sealed. Three more buildings are pending demolition.Earlier in September, Lubarsky’s father urged the head of the IDF’s Central Command, Maj.-Gen. Nadav Padan, to demolish the home as soon as possible.“Three and a half months have passed since Ronen was murdered and the house of the terrorist is still standing, and for three and a half months we’ve been getting the same answer,” Vladimir Lubarsky wrote in an emotional letter. “The terrorist’s house that not only shelters a family of murderers, but is also a place where the attack was planned and the murder was committed. How is this house still standing?“Three and a half months ago, my dear son fell in combat. Ronen wanted to enlist in the Duvdevan unit in order to save lives, and at the end of the day he sacrificed his own,” Lubarsky wrote. “I am appealing to you, Maj.-Gen. Padan. You have great responsibilities on your shoulders. The eyes of all your subordinates are on you. Your decision regarding the demolition of the home of the terrorist must show the soldiers, whose comrade in arms was murdered, that the state backs them and does not abandon them in life or in death.”Defense Minister Avigdor Liberman wrote on his Twitter account following the announcement that the demolition would be carried out as soon as possible: “We are fighting terrorism with determination! We are going to demolish from the foundation the entire four-story building, where the despicable terrorist, may his name be erased, who murdered IDF combat soldier St.-Sgt. Ronen Lubarsky lived.”“The demolition will be carried out as soon as possible. There is no compromise in the war on terror, only an iron hand,” Liberman wrote.