Netanyahu: Women in Israel are leaders in every area; Touma-Sliman: We are celebrating, but struggling for equality. 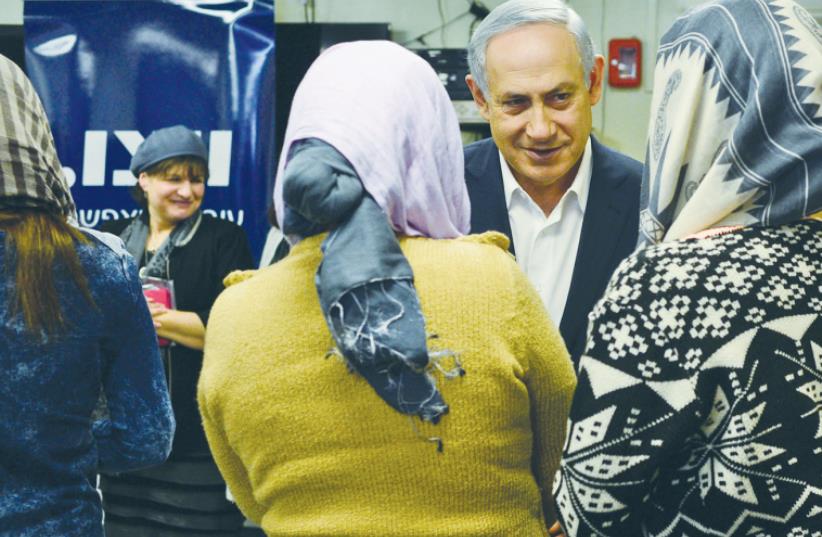 PRIME MINISTER Benjamin Netanyahu meets with women living at a WIZO and government sponsored shelter for victims of domestic violence, during a tour marking International Day for the Elimination of Violence Against Women.
(photo credit: KOBY GIDEON/GPO)
Advertisement
Women lead in every area of Israeli life, from the judiciary to politics to technology to banking, Prime Minister Benjamin Netanyahu said, addressing the Knesset on International Women’s Day Tuesday.Netanyahu mentioned a 2,500 year-old seal archaeologists found in Jerusalem on Monday, which bore the name of a woman in Hebrew – Elihana Bat Gael – saying the seal is “unique, because we don’t see many seals belonging to women, but we shouldn’t be surprised, because there have been women of special status throughout our history.”The prime minister expressed admiration for Israeli women, including his wife Sara, who “combine work, family and children in a way that is worthy of deep appreciation.”“That is not an easy burden, and we, the men, need to recognize the fact that we need to increase our partnership in carrying that burden. I try to,” he said. “I think the world is changing, and we men need to express that change in our actions.”In addition, Netanyahu said that he is acting to ensure that the equality promised in Israeli law is enacted.“We will continue fighting with all our might against sexual harassment, violence and discrimination, and to decrease the pay gap in the market, especially in the public sector. I am sure Israel will continue to set an example in this area, not only in the Middle East, where it’s easy, but in the whole world. We will be a light unto the nations,” he stated.Opposition leader Isaac Herzog (Zionist Union) said he is proud that his faction is one-third female, and called all female MKs an inspiration.“It is true that there are more women in this Knesset than ever before [32], but that still is not enough. In order to fight racism and inequality, we need to see more female leaders. It cannot be that in Israeli governments there are still only two or three female ministers on average. It cannot be that we can count the number of female mayors on one hand,” he stated.Knesset Committee on the Status of Women and Gender Equality chairwoman Aida Touma-Sliman (Joint List) said that International Women’s Day marks not only a celebration, but also a struggle for equality.“We are celebrating our successes and achievements, which we reached through a persistent struggle for women’s rights and a civilized society with social justice,” she said. “We deserve to celebrate every step forward.”As for the “struggle” aspect of the day, Touma-Sliman said: “We still have not reached where we want to be... This Knesset has the greatest representation of women but we are still only a quarter of this House. There are still women who have the right to vote but not to be elected [in sectorial parties that do not allow women to run]. Everyone wants our votes, but not everyone wants us making decisions.”MK Aliza Lavie (Yesh Atid) said that this was a day of introspection, because not enough progress has been made.“We made a lot of progress in the area of sexual harassment...but at the same time, women are still assaulted every day, and there are men who allow themselves to harm women,” she stated.Similarly, MK Revital Swid (Zionist Union) said she has mixed feelings about International Women’s Day. “Why do we even need this day? If everything was alright, then no one would think to mark it.“There is no escaping it. As long as we are in an age when women are discriminated against, we need to mark this day,” Swid stated.Among the Knesset committee meetings held marking International Women’s Day was one in the Foreign Affairs and Defense Committee on women in the IDF.IDF representatives said that women are increasingly integrated in core positions, with 85 percent of jobs available to women.Of female soldiers, 5.7% serve in combat positions.They also said that they are working on allowing women to serve in higher quality positions by integrating entrance exams for male and female recruits.“With all due respect to the impressive progress, it is unthinkable that in 2016 there are jobs in the IDF that are still closed to women,” MK Merav Michaeli (Zionist Union) lamented. “Just like there are men who can’t lift weights or be combat soldiers, there are women who can’t and women who can. The decision to integrate must be based on a screening process and not on gender.”MK Shuli Moalem-Refaeli (Bayit Yehudi) disagreed, saying: “Women are not men and men are not women. That is reality, and therefore, suitability is important.”Also on Tuesday, Knesset House Committee chair David Bitan (Likud) declared that the legislature will mark “Men’s Day” in May, saying International Women’s Day and gender equality is important, but “we cannot forget men on the way.”MK Ayelet Nahmias-Verbin (Zionist Union) responded to the idea on Twitter: “When there is a majority of women in management, and when there are only three male ministers in the government, then we’ll know that it’s time for ‘Men’s Day,’ and we’ll even demand to make it international.”However, she added, Bitan can be celebrated on “Mensch Day.”