Knesset hits the road to play politics with kids

The event was part of the legislature’s ongoing “Connecting to the Knesset” program, in which MKs and Visitors’ Center staff played educational games with children around the country. 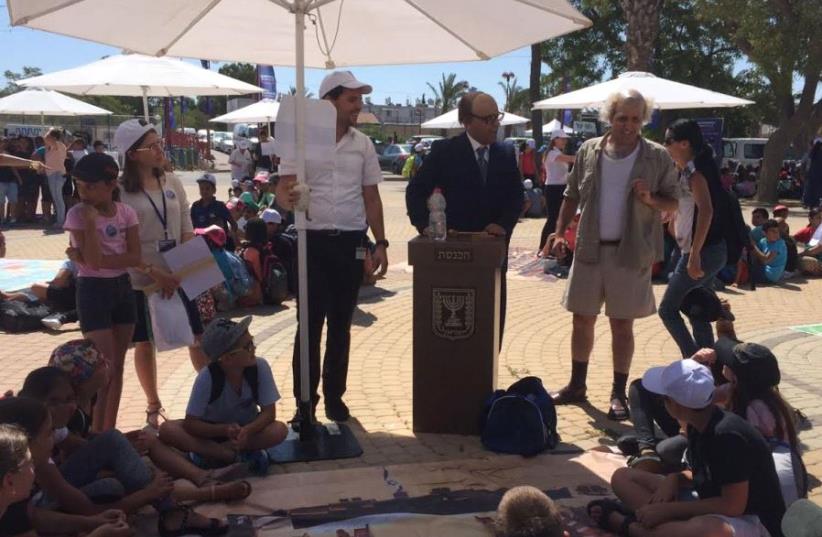 Impersonators of former prime ministers Menachem Begin and David Ben-Gurion teach children civics as part of a Knesset activity in Dimona.
(photo credit: COURTESY KNESSET)
Advertisement
A dozen lawmakers from the coalition and opposition took part in a Knesset-sponsored civics- themed day of activities for families in the southern city of Dimona on Sunday.Activities included explanations of the Knesset’s work, meetings with MKs, impersonations of former Israeli prime ministers, computer and trivia games, environmental workshops, arts and crafts projects and a presentation by the Knesset security’s dog squad.Knesset Speaker Yuli Edelstein, who attended the event, said the Knesset is “constantly looking for creative ways to connect the public to the Knesset’s work and create an attractive experience that will also send the message of how relevant and influential the Knesset’s work is on every citizen.“I’m pleased that we have succeeded to reach hundreds of thousands of citizens per year with different activities the Knesset initiates, and by going out to cities and towns around the country,” he said.The event was part of the legislature’s ongoing “Connecting to the Knesset” program, in which MKs and Knesset Visitors Center staff engage in educational games with children around the country.A similar day of activities will take place in the North later in the summer.