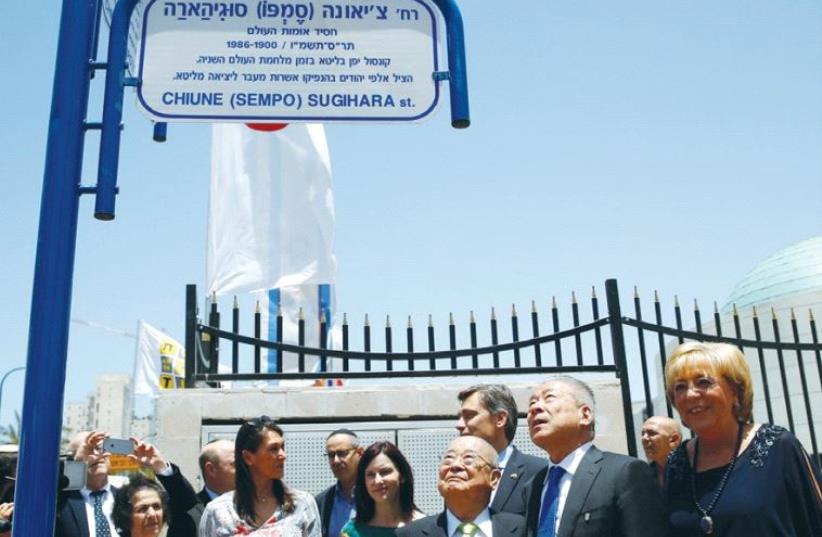 NETANYA MAYOR Miriam Feirberg-Ikar (right) attends a streetnaming ceremony in Netanya in June.
(photo credit: BAZ RATNER/REUTERS)
Advertisement
Netanya Mayor Miriam Feirberg- Ikar will remain in police custody until Sunday, after the Lod District Court rejected her appeal for release yesterday.Police arrested the mayor on Wednesday on suspicion of accepting bribes worth millions of shekels, in a widespread corruption case that has shaken the Netanya Municipality.Despite Feirberg-Ikar’s appeal, Lod District Court judge Erez Yekuel said that there was reasonable suspicion in connection to police allegations to warrant Feirberg-Ikar’s detention, and her release could disrupt the ongoing police investigation.However, her remand was shortened by one day, until Sunday.Supt. Elisha Kogan, who represented the police in the court, accused the suspect of “concealment and obfuscation.”The police investigation centers on the Coral luxury housing project in Netanya. Feirberg is suspected of not disclosing her 2.5 percent stake in the building when granting the building’s developers favorable zoning and building permits.Three suspects arrested on Monday in connection with the corruption investigation also had their appeals denied, and will remain in police remand. Among the three is the mayor’s son, Tzafrir Feirberg, contractor Avraham Tshuva, attorney Avraham Gogig and architect Gabi Tetro. The judge did not allow the release of the suspects, but shortened Tetro’s detention by one day, also until Sunday.Feirberg-Ikar’s ex-husband, Eliyahu Feirberg, who was arrested on suspicion of accepting bribes on Fierberg-Ikar’s behalf and of money laundering, had his remand extended by six days.In addition, municipal official Rabbi Shimon Sher, who was chairman of the Subcommittee for Planning and Building in Netanya, two contractors, and an unidentified associate of a municipality official were also arrested on Wednesday and remanded for six days in connection to the corruption case.A statement on Thursday from the Lahav 433 special investigations unit, which is conducting the investigation, said the three are being investigated for bribery, fraud, money laundering and tax offenses in connection with Netanya’s real estate sector.One of four women mayors in Israel, Feirberg-Ikar is a Likud pillar and is close to Prime Minister Benjamin Netanyahu. She has served as Netanya’s mayor for 18 years.In an interview with Ynet, Feirberg-Ikar’s lawyer, Nati Simchoni, said that Feirberg-Ikar feels sickly behind bars. Simchoni also castigated police for creating a “Kafkaesque” situation in which Feirberg-Ikar sits behind bars along with her ex-husband and son. “This arrest is really unnecessary, in our opinion it has no justification,” Simchoni said.