It is no surprise that Hapoel Acre chose to announce the sacking of coach Yaron Hochenboim on Monday night. 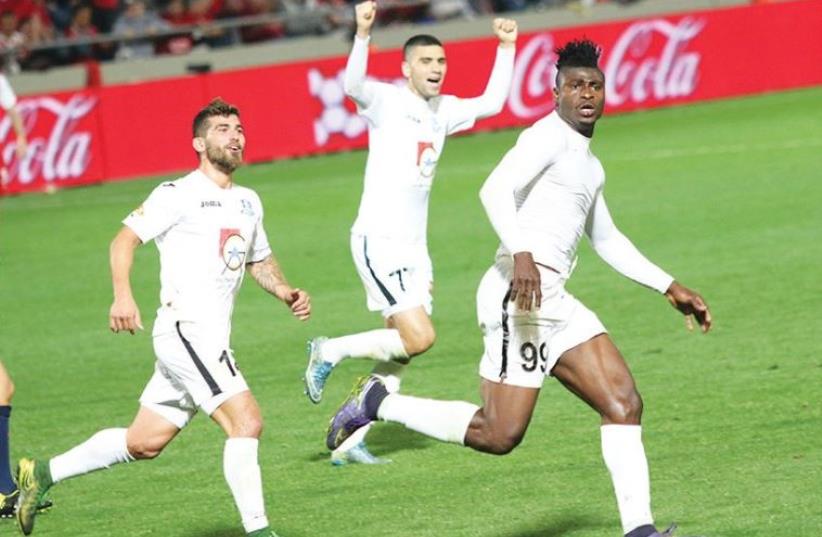 Hapoel Acre striker Lanry Kahinda (right) celebrates after scoring his second goal in last night’s 2-0 win over Hapoel Tel Aviv at Bloomfield Stadium.
(photo credit: ADI AVISHAI)
Advertisement
It is no surprise that Hapoel Acre chose to announce the sacking of coach Yaron Hochenboim on Monday night while Israeli soccer as a whole was engrossed in the top-of-the-table showdown between Maccabi Tel Aviv and Hapoel Beersheba at Bloomfield Stadium.With the team having just two more matches until the end of the season, and with Hochenboim being handed a contract extension a mere month earlier, Acre’s management knew that the best way to avoid criticism for its almost unprecedented panic move would be to announce it when everyone’s attention was focused elsewhere.“We made this move with a heavy heart as we didn’t want to reach this situation,” read a club statement. “However, in light of the team’s form in recent matches, we had no other option.”Momi Zafran was signed as Hochenboim’s replacement, with Acre sitting in the relegation zone after losing its past four games ahead of Saturday’s visit to Hapoel Kfar Saba. Kfar Saba holds a comfortable four-point cushion on the bottom two, but will want to officially secure its survival with a draw or better on Saturday.Only one point separates three teams in the fight against relegation, with Acre tied with Ironi Kiryat Shmona on 32 points, but positioned below it due to its inferior goal difference (-21 compared to -8).At the same time on Saturday, Kiryat Shmona hosts Hapoel Haifa, which is just one point further in front.Regardless of Saturday’s results, the identity of the team that will join rock-bottom Maccabi Netanya in demotion to the National League will only be determined when the final matches of the season are played next weekend.Acre hosts Kiryat Shmona, while Haifa welcomes Bnei Yehuda. Haifa is the only one of the three teams which can officially secure its top-flight status on Saturday should it win and Acre lose.Elsewhere, Maccabi Haifa visits Bnei Sakhnin in a direct showdown for fourth place in the standings. Both teams have 47 points, with Sakhnin sitting in fourth thanks to its slightly superior goal difference (9 compared to 7).The team that will finish in fourth place will qualify for the Europa League next season should Maccabi Tel Aviv beat Maccabi Haifa in the State Cup final later this month. A Haifa win in the final would secure its place in Europe next season and render fourth place all but meaningless.The battle for the league title will resume on Monday, when leader Hapoel Beersheba, which holds a threepoint gap at the top, hosts Beitar Jerusalem, while second- place Maccabi Tel Aviv visits Hapoel Ra’anana.