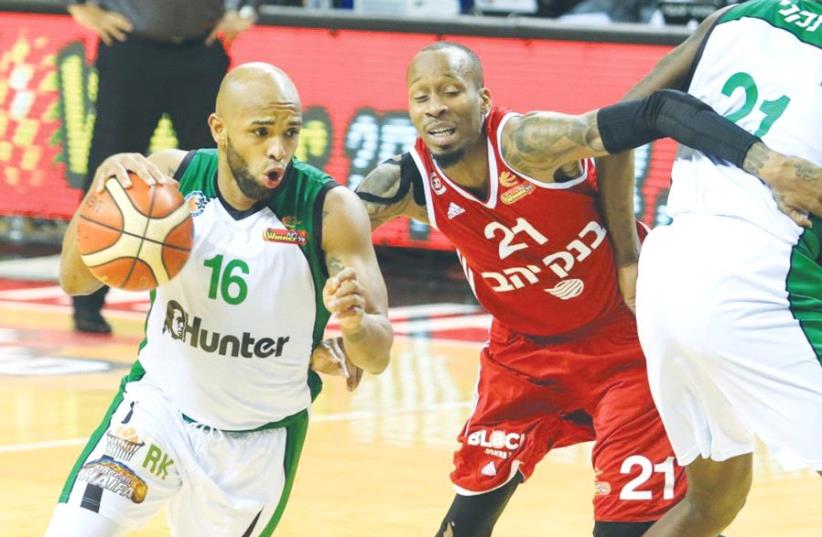 Maccabi Haifa guard Gregory Vargas (left) drives past Hapoel Jerusalem’s Tarence Kinsey during last night’s 86-69 win at Romema Arena.
(photo credit: ERAN LUF)
Advertisement
On the back of a club record seven straight defeats over all competitions, Maccabi Tel Aviv hosts Maccabi Haifa on Thursday night in danger of dropping even further down the standings.Maccabi occupied first place for much of the first six months of the campaign, opening the season with eight wins from its first nine local league games to set the pace.Despite its disastrous Euroleague campaign and two changes at the head coaching position, the yellow-and-blue still seemed to be cruising towards the No. 1 seed in the BSL playoffs up until a month ago, which would also mean it could choose its Yad Eliyahu Arena as the host venue for the season-ending Final Four tournament.However, four consecutive losses have completely derailed Maccabi’s campaign.Tel Aviv dropped to a 17-10 record and third place in the standings following Saturday’s 65-57 defeat at Hapoel Jerusalem and could find itself in fourth by the end of Thursday’s action.A Maccabi defeat to Haifa combined with a Bnei Herzliya win over Hapoel Eilat would leave the yellow-and-blue in fourth place and increase the pressure on coach Ainars Bagatskis, who is in danger of losing his job even with less than two months remaining in the season.“We played well on defense against Jerusalem and Eilat, but we missed a lot of open shots,” said Maccabi guard Gal Mekel.“We feel good about our defensive play, but our offense needs to flow better. Statistically we are the best offensive team in the league. It hasn’t shown in our past few games and we need to focus on that.”With each team having six more regular season games to play, Maccabi’s place in the playoffs isn’t even guaranteed.Only three games separate Hapoel Eilat in second place and Maccabi Rishon Lezion in ninth, meaning every result could prove to be significant.Eilat is the league’s in-form team, moving ahead of Maccabi on a tiebreaker following an 84-81 overtime win over Hapoel Holon last week.Holon remained in first place with a one-game gap.Eilat has won 11 of its past 13 games and holds the head-tohead tiebreaker against both Holon and Maccabi Tel Aviv.A win at Herzliya, which is in fourth with a 16-11 record, will also give Eilat the tiebreaker over the Sharon club, leaving it in an excellent position to continue its surge up the standings.“What we learned from the game against Holon is that you should never give up,” said Eilat coach Oded Katash after his team forced overtime despite trailing by four points with just over 10 seconds to play in regulation.“You have to believe until the final second.”After snapping a three-game losing streak with the win over Maccabi, Jerusalem looks to build momentum when it visits Holon on Thursday. Jerusalem has a 14-13 record and just a one-game gap in the battle for a top-eight finish.Holon’s last four games have been decided by a combined 10 points, but it has dominated Jerusalem this season, winning at home by 23 points when they met for the first time and claiming an 85-79 victory in Jerusalem in their last clash at the end of January.On Friday, Maccabi Ashdod (11-16) hosts the already relegated Maccabi Kiryat Gat (4-22). On Saturday, Rishon Lezion (13-14) welcomes Hapoel Tel Aviv (13-14) in another showdown with playoff implications.Elsewhere, Ironi Nahariya (13- 14) goes to Hapoel Gilboa/Galil (12-15), which is also still alive in the tight playoff race.