International Women’s Day on Tuesday was a perfect opportunity to celebrate the achievements of local female athletes. 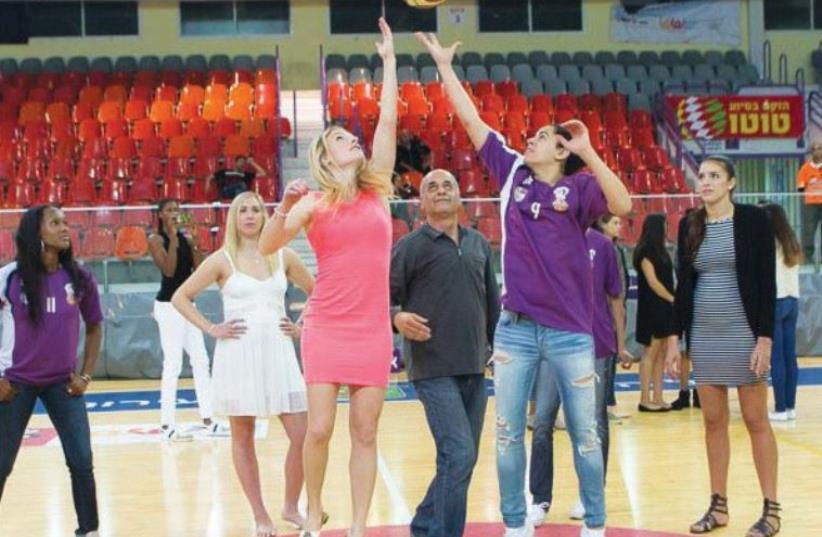 Players from the women’s basketball Premier League held a symbolic tip-off while wearing street clothes on Monday as part of their protests against the lack of funding by the Ministry of Culture and Sport
(photo credit: WOMEN’S BASKETBALL PREMIER LEAGUE)
Advertisement
One way or another, the teams’ and players’ strike that has suspended play in the Israeli women’s basketball Premier League since last week will soon end.However, even when the playoff semifinals finally get under way in what will surely be a celebratory mood, the sad state of local women’s hoops and women’s sports as a whole in Israel will remain all the same.International Women’s Day on Tuesday was a perfect opportunity to celebrate the achievements of local female athletes, with the likes of Yael Arad, Esther Roth-Shachamarov and Lee Korzits responsible for some of the greatest moments in local sports history.But just as with the strike, it also highlighted how much work is still required to bring Israel up to scratch with the rest of the world when it comes to female participation and success in sport.According to figures collected by Dr. Itzik Ben Melech, one of the founders of Israel’s Elite Sport Department who also ran sport development programs in South Africa and Kenya, only 19.5 percent of the active athletes in Israel are women, a far cry from the average in OECD countries which is closing on 50 percent.That figure is made all the worse by the fact that in Israel only two percent of the population, male or female, are active athletes, compared to between 20 to 35 percent on average in Europe.There are less than 20,000 active sportswomen across the country, which includes competitive bridge and chess players.Around a quarter of those are basketball players, by far the leading sport. The state of local women’s hoops is a prime indicator of the state of female sports as a whole in the country, and as things currently stand, that is not good news.The women’s league announced last week that it was going on a strike after not receiving the NIS 2.4 million it was promised by the Ministry of Culture and Sport via Athena, Israel’s project for the promotion of women’s sports.Athena was set up by previous Minister Limor Livnat in 2004.The chairman of the women’s league, Iris Stark, sent a letter to current Minister Miri Regev demanding the money within 48 hours, and after her request was rejected, the league suspended all play, with the semifinal playoffs not beginning last Thursday as scheduled.“The league’s actions and the behavior of chairman Iris Stark is irresponsible, unprofessional and is solely a result of their mismanagement,” the ministry wrote in a statement last week. “The Minister has worked in order to increase the funding from NIS 2 million to NIS 3 million a year even though she was told that the league has no real need for such sums.”The Director General of the Ministry of Culture and Sport, Yossi Sharabi, said last week that NIS 600,000 will be transferred to the league immediately, with a similar amount to be handed to the league later this season.However, that did little to pacify the league, which said it will continue to strike until it receives the full amount it believes it is owed.“This is an extremely significant moment in the history of Israeli women’s hoops and perhaps women’s sport as a whole,” said the chairman of Ramat Hasharon, Rachel Ostrovich. “We are completely united.We are no longer nice submissive girls that are willing to accept the whims of those who hold the funds that belong to us. It is time to do women’s basketball justice.”The league has the full backing of the players.“Today we started an important fight for the rights of women in Israel,” wrote Israel national team and Ashdod guard Shay Doron. “It is about time that Israel, being a western country, lines up with the rest of the world. It is sad that in 2016 there is discrimination in funding between men and women. I hope that the public understands that this is a battle which could affect the future of every girl in the country. Sport is an important tool to help promote women’s rights, and women’s basketball is the leading female sport in the country."“This battle is bigger than the game. It is about the future of Israeli society,” Doron concluded.Negotiations between the sides progressed on Monday and they are set to reach a compromise which will see the money transferred to the league as a bonus to encourage teams to use more Israeli players, similar to the one handed out in the men’s BSL.While a solution will soon be found to ensure the women’s league returns to action, it is clear to all involved that far more needs to be done in order to make a significant change to women’s sports as a whole in the country.The founding of Athena was a step in the right direction, but it is a mere drop in the ocean.A massive increase in funding is ultimately the only thing that can bring about an improvement, as proven in the US in the 1970’s.Title IX of the Education Amendments Act of 1972 prohibited discrimination on the basis of sex in schools that receive federal funding – including in their athletics programs. In large part due to that initiative, women’s participation in sport in the US went from a paltry four percent 40 years ago to today, where 43 percent of active athletes in America are women.It is difficult to see such a mammoth change coming to fruition in Israel, but clearly a lot more needs to be done in order to get more girls involved in sport, and to eventually also register greater success on the international scene.It is about a healthy lifestyle a lot more than it is about medals and that is something we shouldn’t be compromising on.allon@jpost.com