Maccabi enters the game one point back of leader Beersheba after slashing the margin by four points over the past couple of weeks. 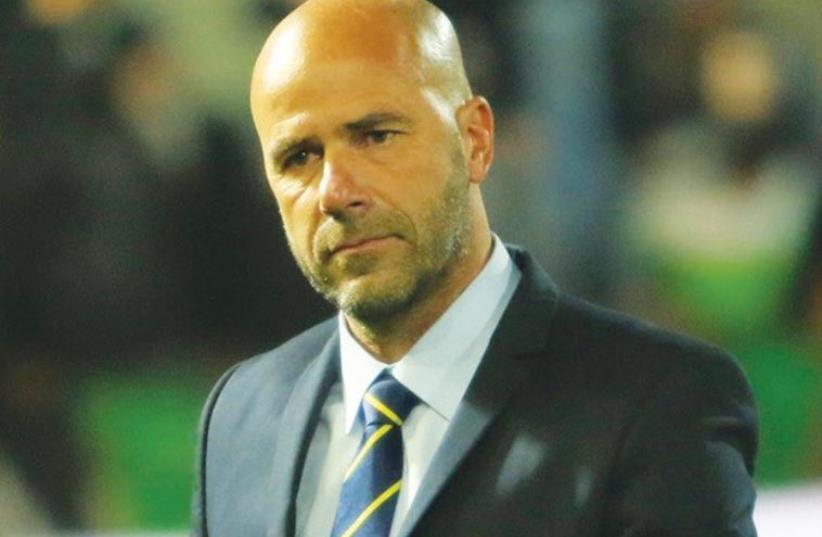 Maccabi Tel Aviv coach Peter Bosz
(photo credit: DANNY MARON)
Advertisement
Maccabi Tel Aviv coach Peter Bosz tried to downplay the importance of Sunday’s mouthwatering showdown with Hapoel Beersheba at Turner Stadium, saying on Wednesday that all nine of the yellow-and-blue’s remaining Premier League matches are equally important.Maccabi enters the game one point back of leader Beersheba after slashing the margin by four points over the past couple of weeks.The yellow-and-blue is aiming to become just the second team in local soccer history to win four straight championships, the first since Hapoel Petah Tikva took five consecutive league titles between 1959 and 1963.“I think every game we play until the end of the season is crucial,” Bosz said on Wednesday in the team’s prematch press conference. “This game is not a final and if we win or lose it’s still not the final result. There are still plenty of games left in the season.It’s an important game and so are the other eight games after this game.”Maccabi enters the encounter on the back of five straight wins, keeping a clean sheet in its past three. Maccabi labored for 80 minutes on Saturday until Eran Zahavi scored the winner in the 1-0 victory over Bnei Sakhnin at Bloomfield Stadium. The Maccabi captain took his tally for the season to 28 goals, two shy of Nissim Elmalich’s record for goals in a season from the 1954/55 campaign.“Everyone understands that it’s better to come into this game winning and not drawing. But it’s an away game for us and it’s important that we have been playing well prior to this match,” said Bosz. “As a player these are the best games to play in.I can tell the players what to expect and help them but at the end of the day it’s up to the players to perform on the pitch.”Beersheba arrives at the match in a relative slump, only managing a 0-0 deadlock against Hapoel Ra’anana at Turner last week for its second straight draw at home.Beersheba extended its unbeaten streak to 22 matches, but the leader failed to find the back of the net in a game for the first time since November.“We are not afraid of Beersheba,” added Bosz. “They have a good team and you must always respect your opponent, but why be afraid. I have a lot of respect for them.”