By LAHAV HARKOV
AUGUST 18, 2010 11:29
facebook loves eden 311
(photo credit: Screenshot.)
Advertisement
A new Facebook page in support of former IDF soldier and photo-poster Eden Abergil was opened on Wednesday, calling on soldiers to post similar pictures from their army service."We're All With Eden Abergil," the new group, was created with the following description: "Eden was an excellent soldier, and now the army is throwing her to hell and putting her on trial. Whether you agree with her or not, we will not let the army who sent her [into service] to run away from responsibility." The group also declared Abergil "the most beautiful and sexy soldier in the IDF!!!" and "one of the last of the honest people in the country."RELATED:
Click to vote: What do you think of Eden Abergil's facebook photos?
Opinion: A picture is worth a thousand livesAlong with photos of soldiers, the group features photographs of police investigators with a serial rapist and the following tagline: "Policemen like to take pictures as souvenirs, too, with the criminals they captured. For example, when rapist Benny Sela (was caught, the policement who found him took a picture with him [pictured below] in the interrogation room!" 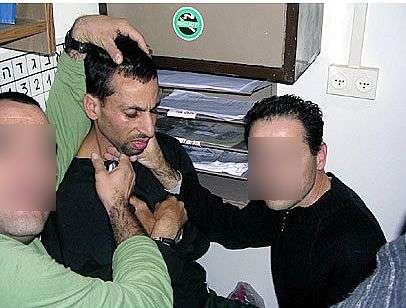 "The group features a photo album titled "Not only Eden enjoyed the army," which includes photographs from Breaking the Silence's facebook group, as well as some new ones. One photo depicts four female soldiers pointing their guns at a woman who is kneeling and blindfolded, with her hands tied behind her back [pictured below]. Another shows a female soldier posing with a tied-up Palestinian prisoner. A Facebook member, writing under the pseudonym "Kahane's Legacy" wrote that "we can not forget one thing: These are not just prisoners. These are not just innocent people from the street; they are terrorists who were arrested a few minutes before trying to murder these soldiers." Another commenter, Mohamad Jaber wrote: "A smart, brave and strong army does not do such things. You should be embarassed! People with out hearts - what is enjoyable about this picture?"One commenter wrote: "These innocent pictures made the whole world hysterical? You don't have anything to do - there isn't poverty and messes in other countries?" 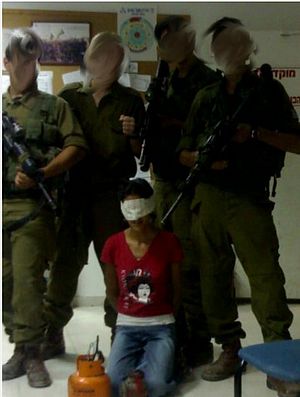 Members of the group also added photos from the Abu Ghraib scandal, with the caption: "This is what Americans do to Iraqi soldiers - Guys, can we really compare?!! Eden only took a picture next to them - she didn't humiliate them or anything." The photos are particularly relevant, as Abergil has been compared in the foreign press to female American soldier Lynndie England, who was implicated in the incident in the Iraqi prison.
Advertisement
Subscribe for our daily newsletter