'It was an unintentional mistake'

By JPOST.COM STAFF, Gil Stern Stern HOFFMAN, AP
MARCH 14, 2010 10:23
biden barak 311
(photo credit: Ariel Hermoni / Defense Ministry)
Advertisement
DefenseMinister Ehud Barak on Sunday evening said that the approval of 1,600new housing units in east Jerusalem during US Vice President JoeBiden's visit to Israel was "not intentional," but stressed that itwas an "undoubtedly superfluous and dangerous" move, and that it was now necessary to work to decrease the tension with the White House."Thetechnical mistake during Biden's visit was not intentional but it wasundoubtedly superfluous and dangerous," Barak said."But our connectionwith the American people and our relationship of respect with theAmerican administration and the president are an important component ofIsrael's security and foreign relations."Related
Netanyahu: We'll prevent future embarrassment
Analysis: Construction freeze fiasco a test for J'lem, US
The defense minister went on to saythat, "While we are ultimately responsible for our fate, our friendshipwith the US is important for security and for the chance to calm downthe region and this friendship requires us to behave with mutualrespect and responsibility. I am convinced that we must continueworking to decrease tension and to immediately restart the diplomaticprocess and we will invest our time and effort for that purpose."Barak's remarks came hours after David Axelrod, US President Barack Obama's chief political adviser, said on Sunday that the Interior Ministry's decision to approve the new Ramat Shlomo housing units during Biden's visit was both an "affront" and an "insult." 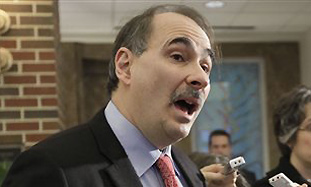 The move undermines the fragile effort to bring peace to the troubled region, Axelrod told NBC's "Meet the Press" Sunday, adding that the timing of the announcement was "very destructive."Earlier Sunday, Prime Minister Binyamin Netanyahu referred to US and European condemnation of Israel’s announcement, saying in the cabinet meeting that the incident was “regrettable and should not have taken place.” Netanyahu said, however, that the announcement was made with no ill will. “We have appointed a team of CEOs to ensure this sort of thing doesn’t happen again; this should suffice and there’s no need to say anything more.”“We opened the papers today and read analyses and assessments and I suggest we relax and don’t get carried away,” Netanyahu said. “We are dealing with this issue seriously.”In related news, Netanyahu on Sunday called Likud MK Danny Danon andasked him to delay a party central committee meeting scheduled forThursday, where the Likud was expected to vote on a proposal to end theconstruction freeze in September and start building in the West Bank.Netanyahusaid that he was making the request because of the sensitivity of thetopic and his upcoming visit to the United States. Danon wasconsidering Netanyahu’s request.MK Danon obtained the necessarysignatures of Likud Central Committee members to force a meeting of thecommittee on Netanyahu.  The meeting was also supposed to be apre-Passover toast, which Netanyahu always does for Likud activists
While Biden accepted Netanyahu’s apology onThursday, the White House did not relent, with Secretary of StateHillary Rodham Clinton calling to scold Netanyahu over the phone for 43 minutes on Friday and aspokesman for Obama calling Netanyahu’s conduct“dangerous.” The Europeans and the so-called Mideast Quartet joined in condemnation.Catherine Ashton, foreign policy chief of the EU, called on Netanyahuto show his leadership, saying that a peace deal was “necessary.”
The Quartet, comprised of Russia, the EU, the US and the UN, issued astatement where it “condemns” Israel’s decision to advance housingplans. The statement urged both Israel and the Palestinians to avoidmaking unilateral moves.Gil Hoffman contributed to this report
Advertisement
Subscribe for our daily newsletter