By JUDY SIEGEL-ITZKOVICH
SEPTEMBER 12, 2010 23:23
Advertisement
The Altman Natural Pharmaceutical company in Holon is facing a multimillion-shekel class-action lawsuit by customers who purchased its Megagluflex tablets, which it advertised for many years as “rebuilding joint cartilage” in people suffering from osteoarthritis. 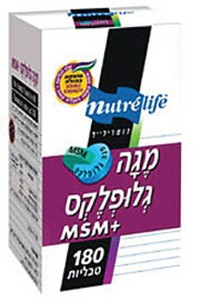 Tel Aviv District Court judge Altuvia Magen last week recognized such status for the lawsuit by Ilan Jann and lawyer Yitzhak Hoshen who claimed they used the product and were “misled” into believing that it would repair painful degenerated cartilage in the joints.The company, which was established in 1993 to sell vitamins and other food additives and has been marketing Megagluflex, imported from the US, since 1998, denied the charges – even though in recent years it has put stress mainly on the claimed ability of the active ingredients – glucosamine and chondroitin – to minimize pain resulting from the degenerative orthopedic disease, as well as pain suffered by sportsmen.The applicants for class-action status maintained that claiming that the food additive “builds cartilage” in humans has gone unproven in clinical studies. Each package of 210 tablets of Megagluflex, whose recommended dosage is three per day, costs NIS 210. The applicants argued that they could have taken much cheaper painkillers for the same effect.While radio and other media ads by Altman for years maintained that the product restores cartilage, the company has recently toned down its claims, and its Web site does not list Megagluflex among its catalog of products; only a search calls up information about the product, which is based on chicken cartilage.The site today stresses the “pain-reduction” aspect of Megagluflex and not the “cartilage-building” claims, but the Web site does state that its product is the “only one that has been tested in Israel and proven effective” and that it “protects cartilage.”Originally, glucosamine and chrondroitin were derived from shark cartilage. Today, as sharks have become rare, the compounds are made around the world from pigs or chickens. Batya Farhi, the company’s deputy manager for development, and scientific director Sigal Band told The Jerusalem Post on Sunday that the Israeli product is based on chicken cartilage, is kosher and carefully tested on a batch-by-batch basis. Sales of the product currently total about NIS 10 million a year, they said.The company representatives said “blood tests of users show reduction in the loss of cartilage” and that glucosamine and chrondroitin are “the two building blocks of cartilage.They have been shown to have biological activity in people. They reach the cartilage.“When the case comes up for discussion, we will bring our own experts who say that the product is based on scientific research. We are not worried,” they said, even though Hoshen and Jann claimed nearly a billion shekels were at stake.The Health Ministry said Sunday that would not comment, but there have been no ministry warnings about possible false claims by Altman about this product.The ministry spokeswoman added that “as a result of the ministry’s opinion, Altman years ago changed its advertising.”Yet Farhi and Band denied this, saying the ministry did not require Altman to change its advertising or induce it to revise its message or claims in recent years.“We changed our advertising because we often change our messages and use different marketing strategies,” the two women said.

The Altman officials maintained that major scientific organizations, including the Osteoarthritis Research Society International (OARSI) and the European League Against Rheumatism (EULAR) have recommended glucosamine and chondroitin for fighting the degeneration of human cartilage and not only for reducing pain.They said that the district court judge would not allow people who bought Megagluflex only to relieve pain or increase the amount of joint movement to join the suit.Asked to comment on the case, Shaare Zedek Medical Center director-general Prof. Jonathan Halevy, who five years ago wrote a systematic book on the effects (or lack of them) of a wide variety of complementary medicine products, told the Post that there have been no MRI scans done in clinical studies to show that glucosamine and chondroitin rebuild human cartilage.“I have been following the medical literature since my book was published. It is still an open question if these compounds are better than a harmless placebo in reducing the pain of osteoarthritis. Maybe they do. But they have not been proven to improve the condition of the cartilage.”
Advertisement
Subscribe for our daily newsletter