By JPOST.COM STAFF
JUNE 27, 2010 09:27
311_ schalit march good
(photo credit: Ben Spier)
Advertisement
Noam Schalit spoke in Nahariya Sunday evening as the first day of the march to Jerusalem for the release of Gilad ended in the city.Speaking at the city mall to thousands of people that joined the march Schalit said that it was a nice surprise to see so many people. He went on to say that he appreciates the support and it gives the family strength. He called upon people to continue marching with them all the way to Jerusalem.RELATED:
Learning the lessons of Kerem Shalom
Israel stands firm: We won't free 'mega-terrorists’ in swap
Colosseum turns off lights for Schalit
Steinitz: Marches won't free Schalit 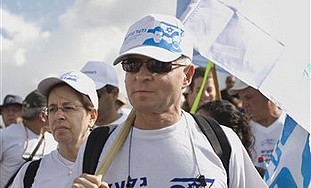 Noam and Aviva Schalit march to Jerusalem, Sunday.
Prime Minister Binyamin Netanyahu extended an invitation to Noam and Aviva Schalit on Sunday to meet with him in Jerusalem and discuss the government's efforts to free their son. Addressing the Schalit family and the 10,000supporters on the "Freedom March" which set out from Mitzpe Hila on Sunday morning, Netanyahu said, "my heart and our hearts are with Gilad Schalit and his family." The prime minister continued, "Four years after [Schalit's] abduction, I call on the international community to line up alongside the State of Israel and our unequivocal and just demand that our abducted soldier be returned immediately."The Schalit family and supporters began their procession on Sunday from the family's Mitzpe Hila home in the upper Galilee on an 11-day trek to Jerusalem to demand that the government free Gilad from captivity. The procession is currently headed in the direction of Nahariya.Before embarking on their journey, Aviva Schalit told reporters Sunday morning that, "We're heading off on a long, exhausting journey today, and we'll return only with Gilad."

"With your help, and with the help of the public that will join us on the journey, we'll bring Gilad home," she added. On Friday, Noam Schalit called on all Israelis to join him and his family on their march, which will end at the Prime Minister’s Residence in Jerusalem. Once they arrive, “we will sit and we will not return home without Gilad,” said Noam in a video message that he released on Friday, the fourth anniversary of the day that his son, then a 19-year old soldier, was kidnapped as he patrolled the border between Gaza and Israel. He has been held by Hamas in Gaza since then.The only contact his family has had with him has been three letters and one video they have received.Herb Keinon and Tovah Lazaroff contributed to this story.
Advertisement
Subscribe for our daily newsletter