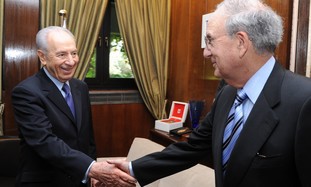 President Shimon Peres told Mitchell at their morning meeting in Jerusalem that "the resolution of the security issues at the heart of these negotiations is crucial," calling the barrage of rocket attacks that followed the IDF's withdrawal
from Gaza a "sobering lesson." Later Friday morning, Mitchell met with Foreign Minister Avigdor Lieberman. 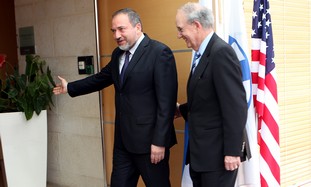 The US envoy was scheduled to meet with Palestinian Authority President Mahmoud Abbas on Friday afternoon ahead of Saturday's PLO Executive Committee meeting on authorizing proximity talks. A second meeting is scheduled for Saturday after the expected authorization, and Mitchell is due to leave the region on Sunday.On Thursday, Abbas said the US has assured him no “acts ofprovocation” would occur during the indirect talks, which the Palestinian Authority insists includes any Israeli construction beyond the Green Line. Abbas admitted that the PA did not receive any specific assurancesregarding construction in Jewish neighborhoods in east Jerusalem.Top Palestinian negotiator Saeb Erekat said on Friday that the Palestinians wanted to give the negotiations a chance, but that success was mainly up to Israel. "Now the Israeli government has a choice, either peace or settlements, and it can't have both," Erekat said.RELATED
Analysis: Proximity’s silver lining?
Landau: PA already planning proximitytalks' breakdown
Abbas gives talks four monthsFormer head of the PA's negotiating team Ahmed Qurei (Abu Alaa) said he would oppose entering negotiations unless the US gave the Palestinian Authority written assurances Israel would freeze all construction in the West Bank including east Jerusalem, and would insist the question of Jerusalem was addressed early in negotiations, Israel Radio reported.London based pan-Arab daily Al-Quds al-Arabi reported widespread opposition among PLO leadership to approving talks discontent at Abbas backing down from demands he had set before as conditions for renewed negotiations.