Justices to rule soon on whether to make joint Egged, Dan and Transportation Ministry arrangements permanent. 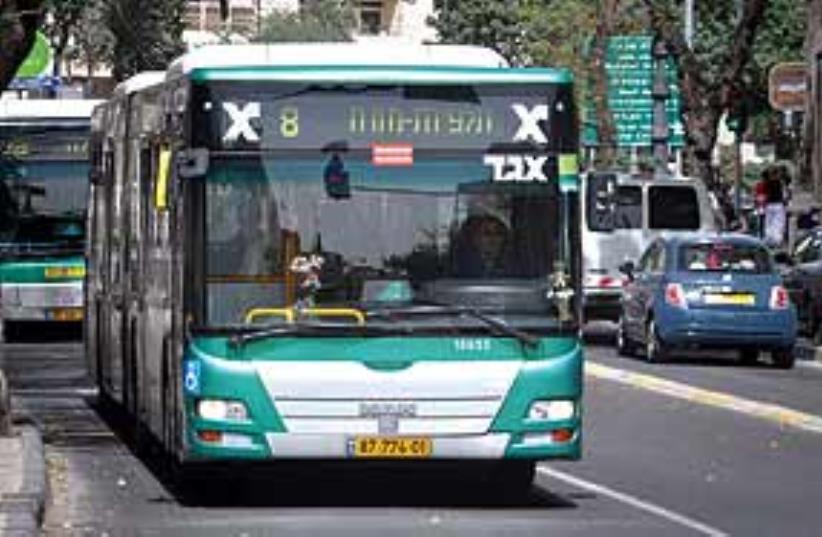 bus311
(photo credit: Sarah Levin)
Advertisement
The High Court of Justice on Tuesday heard the conflicting requests of the petitioners and the state in the petition protesting the gender-separated bus lines operated by the Egged and Dan bus cooperatives and said it would hand down its ruling soon.The petitioners, including the Israel Religious Action Center (IRAC) and five women, including author Naomi Ragen, asked the court to halt a pilot study currently being conducted by the Transportation Ministry, Egged and Dan, and to hand down its ruling without further delay.RELATED:
Court slams Katz for his approach to sex-segregated buses
Poll: Majority of Israelis oppose gender-segregated busesEarlier this year, the High Court issued an interim injunction calling on the Transportation Ministry and the bus companies to operate the gender-separated buses in accordance with the recommendations of a special committee appointed to examine the issue.The committee wrote that the arrangement had to be purely voluntary and no coercion could be applied. Furthermore, there could be no indication that the buses were officially segregated.Thus, there could be no signs to that effect and both men and women should be allowed to board the bus from the back.Furthermore, no new segregated routes could be opened during the test period.The pilot project was launched in April. On Tuesday, the state informed the court of the results so far and asked that it be allowed to continue with the second half of the study, which was due to last until October.During the hearing, the state’s representative, Dana Briskman, said that on the basis of the pilot project findings, the transportation minister would tell the court whether he was prepared to permanently implement the recommendations of the special committee.IRAC attorney Einat Horowitz told the court there was no reason to continue the experiment and urged the court to rule now in favor of adopting the committee’s recommendations.But attorney Ricky Shapira- Rosenberg, representing several religious women’s organizations, argued that the committee recommendations were unacceptable because there could not be such a thing as a voluntary arrangement, especially since the list of segregated buses was determined in the first place by the rabbis of the community.“The fact is that the entire haredi community, men, women and children, have already been told to behave according to the ideas of their rabbis,” she told the court.“Let’s say we conduct a test to see whether it is possible to arrive at a truly voluntary arrangement.“If I were a haredi woman living among haredim, would I listen to what the transportation minister said [i.e. that one may sit wherever one wants] or would I listen to the rabbis? I cannot fathom the idea that a haredi woman would dare board one of those buses where, until today, she would be ridiculed [if she sat on the men’s side of the bus] but now, because the transportation minister says the seating arrangement is voluntary, she would board the bus and sit wherever she wanted.”At one point, when an attorney representing the haredi organization Betzedek was arguing that there are virtually no incidents of coercion on the segregated buses, a woman, who later identified herself as Batya Litman, interrupted the hearing and charged that the lawyer was not telling the truth.“I have been attacked several times,” she said, before Justice Elyakim Rubinstein ordered her to sit down.Later, she told The Jerusalem Post that she came from a haredi family but had turned secular.She said she often traveled on segregated Egged bus lines 40 and 49A to visit her parents and a close friend in the Ramot and Kiryat Mattersdorf neighborhoods in Jerusalem.“I have been physically attacked more than once,” she said.Another woman told the Post that the reason there were not more complaints from nonharedim about their treatment on the segregated buses was because they stopped using them, since they knew how unpleasant it could be.
Advertisement
Subscribe for our daily newsletter