Muslims around the world rally against Trump in solidarity with Palestinians

Trump's announcement on Wednesday has infuriated the Arab world and upset Western allies.

By REUTERS
DECEMBER 8, 2017 14:28
Afghan protesters shout slogans during a protest againstÊU.S. President Donald Trump's recognition of Jerusalem as Israel's capital, in Kabul, Afghanistan December 8, 2017
(photo credit: OMAR SCOBHANI / REUTERS)
JERUSALEM - Thousands of Palestinians protested in a "day of rage" on Friday in the West Bank, Gaza and in east Jerusalem against US President Donald Trump's recognition of the ancient city as Israel's capital.Across the Arab and Muslim worlds, thousands of demonstrators took to the streets on Friday, the Muslim holy day, expressing solidarity with the Palestinians and outrage at the US move.As Friday prayers ended at the Al Aqsa mosque in Jerusalem, worshippers made their way toward the walled Old City gates, chanting "Jerusalem is ours, Jerusalem is our capital," and "We don't need empty words, we need stones and Kalashnikovs." Some scuffles broke out between protesters and police.Trump's decision to reverse decades of US policy and recognize Jerusalem has been met by days of protests, although violence so far has largely been contained.By midday Friday there had been no reports of deaths in two days of demonstrations in the Palestinian territories.Clashes began in some spots of the West Bank after Friday prayers, though the unrest appeared less intense than the previous day. In Hebron and Bethlehem dozens of Palestinians threw stones at Israeli soldiers who fired back with tear gas. 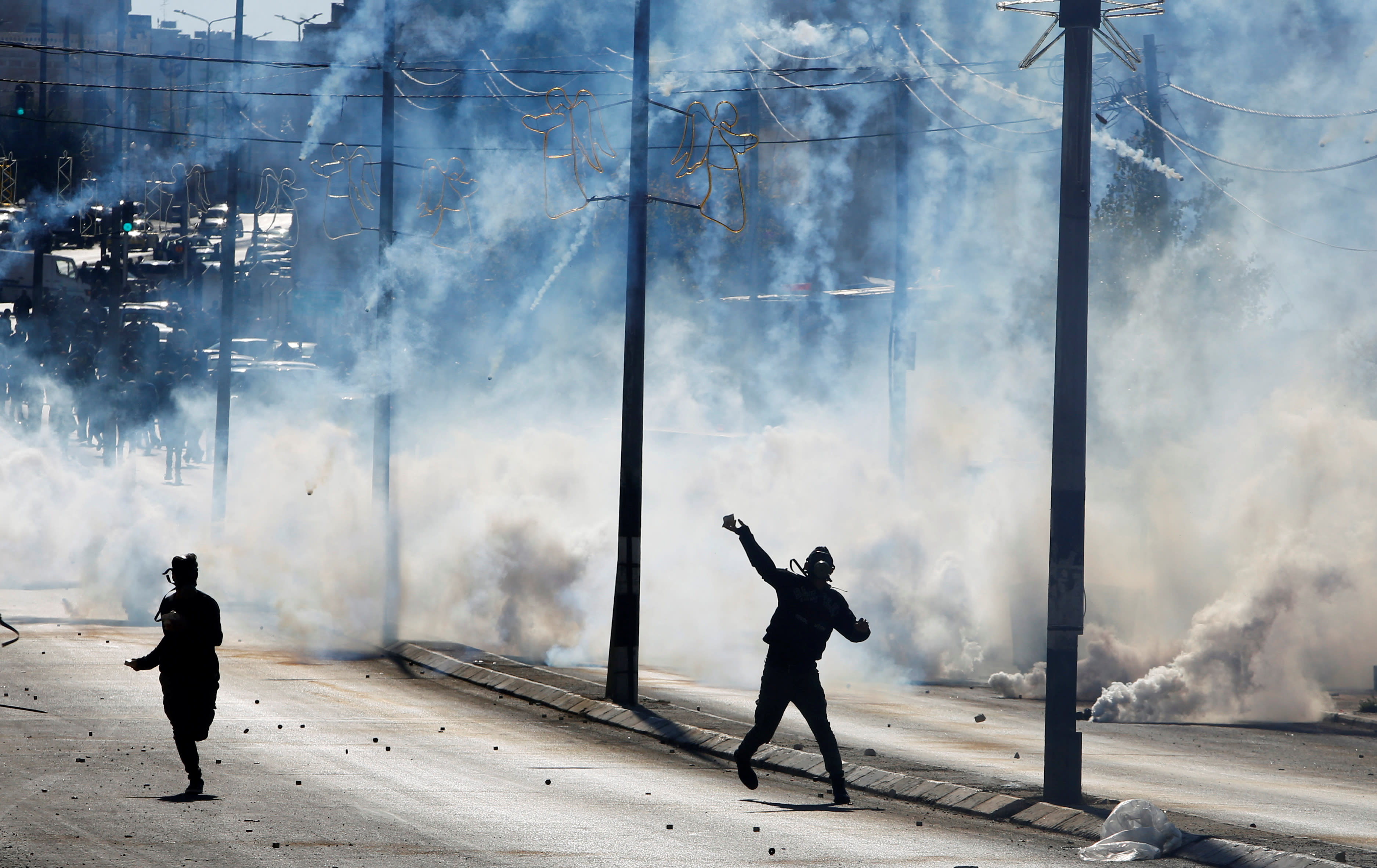 A Palestinian protester hurls stones as tear gas is fired by Israeli troops during clashes as Palestinians call for a "day of rage" in response to US President Donald Trump's recognition of Jerusalem as Israel's capital, in the West Bank city of Bethlehem December 8, 2017 . (photo credit: MUSSA QAWASMA / REUTERS)In Gaza, calls for worshippers to protest sounded over mosque loudspeakers and dozens of youths burnt tires on the main streets of the enclave, controlled by the Islamist Hamas group, and hundreds rallied toward the border with Israel.Hamas has called for a new Palestinian uprising like the "intifadas" of 1987-1993 and 2000-2005 that together saw thousands of Palestinians and more than 1,000 Israelis killed."Whoever moves his embassy to occupied Jerusalem will become an enemy of the Palestinians and a target of Palestinian factions," said Hamas leader Fathy Hammad as protesters in Gaza burnt posters of Trump. "We declare an intifada until the liberation of Jerusalem and all of Palestine."
ENMITYTrump's announcement on Wednesday has infuriated the Arab world and upset Western allies. The status of Jerusalem has been one of the biggest obstacles to a peace agreement between Israel and the Palestinians for generations.Israel considers all of Jerusalem to be its capital. Palestinians want the eastern part of the city as the capital of a future independent state of their own. Most countries consider East Jerusalem, which Israel captured in a 1967 war and annexed, to be occupied territory, including the Old City, home to sites considered holy to Muslims, Jews and Christians alike.For decades, Washington, like most of the rest of the international community, held back from recognizing Jerusalem as Israel's capital, arguing that its status should be determined as part of the Palestinian-Israeli peace process. No other country has its embassy there.The Trump administration argues that the peace process has become moribund, and outdated policies need to be jettisoned for the sides in the conflict to make progress.In Ramallah, the seat of Palestinian President Mahmoud Abbas's Palestinian Authority, the leader's religious affairs adviser said Trump's stance was an affront to Islam and Christianity alike."America has chosen to elect a President that has put it in enmity with all Muslims and Christians," said the advisor, Mahmoud al-Habbash.Israeli police increased their presence in Jerusalem but set no extra restrictions on access for worshippers at Al-Aqsa Mosque, saying they had no indication of unrest there, a sign they anticipated confrontation to be limited. Police regularly impose age restrictions at the site, known to Muslims as the Noble Sanctuary and to Jews as the Temple Mount, when they anticipate major unrest.In Iran, which has never recognized Israel and supports anti-Israel militants, demonstrators burned pictures of Trump and Israeli Prime Minister Benjamin Netanyahu while chanting "Death to the Devil." Opposition to the US move has united Iran's pragmatist faction, which supports greater openness to the outside world, behind hardliners that oppose it.In Cairo, capital of Egypt, a US ally which has a peace treaty with Israel, hundreds of protesters who had gathered in Al-Azhar mosque and outside in its courtyard chanted “Jerusalem is Arab! O Trump, you madman, the Arab people are everywhere!"The imam leading Friday prayer at Al-Azhar said the US plan to move its embassy to Jerusalem was a “terrorist decision"that would add another settlement to those of Israel.Thousands also took to the streets in Muslim-majority Malaysia and Indonesia, where authorities tightened security around USembassies.