Bringing Ukrainian culture to Israel in a time of struggle

A project aimed at promoting contemporary Ukrainian culture in Israel will be launched in Tel Aviv in May. 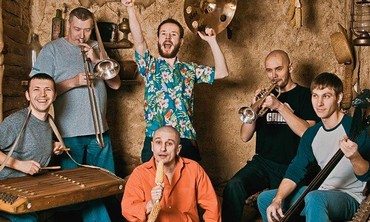 With Russian forces tightening their grip on Crimea, a project promoting contemporary Ukrainian culture in Israel to be launched in Tel Aviv in May comes at a time of need for Ukrainian Israelis.Country of Heroes will take off with a concert by the Perkalaba, Ukranian band from Western Ukraine.Event producer, Esther Katz made Aliya from Kiev to Israel three years ago and says fellow producers Ilan Gozal and George Cohen, who previously only produced western bands , enthusiastically supported the new project."Music is the universal language, and at a time when the media is used for political purposes and often convey information to readers in a distorted form, cultural events become the real communication platform," she said."Israelis born in the Ukraine were brought together by the dramatic events in our home country. We have not forgotten the language and culture of our biological homeland and consider treating it with respect and care," she said.Katz said that Perkalaba play Hutsul - an original style with deep roots in Ukrainian folk music and Balkan and Gypsy motifs.
Since 1988 Perkalaba has toured Ukraine, Germany, Poland, Austria, Switzerland and the Netherlands and this will be their first performance in Israel."Perkalaba plays music for funerals and weddings, fused with the most honest rock and roll from eastern Europe. They use rare traditional instruments during their one hour show," Katz said."We rely on the support of the Ukrainian diaspora and native Israelis and invite our Russian speaking brothers and sisters from all the countries of the former Soviet Union to come and share with us precious moments of music appreciation, " she added.Special guests, expected at the May 16 concert are representatives of the Embassy of Ukraine and wounded activists of Maidan, undergoing treatment in hospitals in Israel.Katz said that the aim of Country of Heroes is to popularize Ukrainian culture."Ukraine is rich in talent in visual arts, theater, dance and we aim to bring the best of it to Israeli audience."Perkalaba Concert Tel Aviv, May 16, 2014
Club Barbie - 8.30pm
https://www.barby.co.il/showcat.aspx?id2=891 – tickets sales through Barby club website, 140 NIS For more information, visit http://perkalaba.com.ua/.
Advertisement
Subscribe for our daily newsletter