The Weekly Schmooze: Trick or treat with Houdini

By LAHAV HARKOV
NOVEMBER 4, 2010 16:31
weekly schmooze 311
(photo credit: Courtesy)
Advertisement
Trick or treat! Halloween, which took place this week, is not a Jewish holiday, but it has special significance for fans of one famous Jew. Magician Harry Houdini, born Ehrich Weiss, died from peritonitis on October 31, 1926, and every year, from 1927 to the 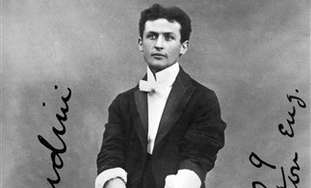 present, a séance has been conducted on his yartzheit in an attempt to conjure up his spirit. So far, it hasn't worked, but we're giving you fair time to buy an Ouija board before the next Houdini Séance. Just in time for Halloween and the séance, the Jewish Museum in New York opened an exhibit called "Houdini: Art and Magic," the first in a major American art museum to explore the famous magician's influence on visual culture. The exhibit, which features historic photographs, archival films, and recent works, will be open until March 2011, and will travel to Los Angeles, San Francisco and Wisconsin. As Houdini himself said: Will wonders never cease?Three days before Halloween, the American Jewish World Service held a benefit in New York, to celebrate the organization's 25th anniversary, and its president, Ruth Messinger's 70th birthday.  Judd Apatow, director of the films Knocked Up, Superbad and executive producer of Schmooze favorite Freaks and Geeks, put together a star-studded tribute video, featuring Ben Stiller, Tracey Morgan, Jerry Seinfeld, Lindsay Lohan, Triumph the Insult Comic Dog, and other bold-faced names making jokes about Fiddler on the Roof and saying random Yiddish words. One comedian featured in the video, Sarah Silverman, mentioned the organization's $22 million in grants to 34 countries.“That throws a wrench in the Jews are cheap premise,” she said. “If you think that’s cheap than there’s no way you’re Asian because you’re bad at math.”It's not every day that a Shas minister gets a letter from a Playboy bunny, but that day came last week. Pamela Anderson, former star of Baywatch and soon-to-be judge of 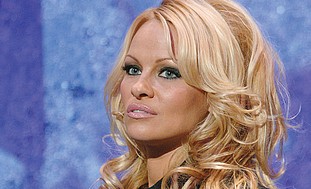 the Israeli version of Dancing With the Stars, wrote a letter to Religious Affairs Minister Yakov Margi, asking him to stop holding the bill to ban the fur trade in Israel from going to a vote. In September, Margi postponed the discussion about the bill, in order to study its religious implications, specifically those pertaining to shtreimels. In Anderson's letter, she says that "the ways in which animals suffer and die in the fur trade violates Jewish principles, which strictly prohibit causing unnecessary suffering to animals."Anderson isn't the first iconic blonde to voice her opinion on this bill. In August Brigitte Bardot asked Industry Trade, and Labor Minister Binyamin Ben-Eliezer to help the bill pass, and make Israel "a light unto the nations."Swiss footballer Johan Vonlanthen is thinking of joining the team and the tribe. The 24-year-old Red Bull Salzburg soccer player is currently undergoing medical tests in order to play for Hapoel Tel Aviv, and would like to convert to Judaism."I feel like I'm already a spiritual Jew," Vonlanthen said. "I believe in the God of Avraham and Jacob, so for me it is beautiful to be here."Israeli media reported that the athlete will not play in matches on Saturdays; however, Volanthen has denied this. He is expected to train with Hapoel in the coming days.The film The Social Network is an international hit, and in honor of its release in Israel, television tabloid "Good Evening with Guy Pines" (yes, that is his real name) interviewed star Jesse Eisenberg, who plays Facebook creator Mark Zuckerberg. Eisenberg gave some bizarre answers, cracking jokes about mohels, and giving a shout-out to a friend in Israel.The Weekly Schmooze collects the hottest Jewish culture news from around the world. Ranging from celebrities to philanthropy to quirky communities, we're here to schmooze about Jews.If you have any news to share with The Weekly Schmooze, write to weeklyschoomze@gmail.com
Advertisement
Subscribe for our daily newsletter