By ZVIKA KLEIN
MAY 13, 2010 15:53
Njeurovision kids singing 311
(photo credit: NRazvan Nidelearger)
Advertisement
The fans were ecstatic, the costumes elaborate and the scores as kitsch as you can get them, but it wasn't just any European song contest - it was the Jeurovision, the kosher version of the popular European competition, and it was held in Stockholm this week. 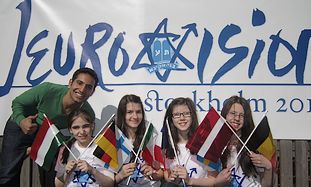 Modeled after the famous Eurovision contest, the 11th annual Jeurovision brought together hundreds of teenagers from across Europe to compete.A group of Jewish youths from Sweden took first place at the contest, with an Italian rapping group claiming second place and the German group coming in third.The contestants, all Bnei Akiva participants, hailed from 10 countries:Sweden, Denmark, Norway, Finland, Italy, Holland, Austria, Germany,Hungary and Belgium. They came from various religious backgrounds,secular too, and their entries featured songs being performed for thefirst time.The event was sponsored by World Bnei Akiva in cooperation with the Jewish Agency and the World Zionist Organization. 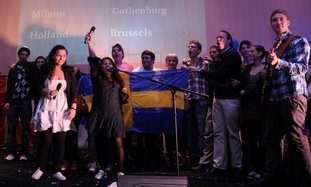 Though last year's French delegation won the contest, Bnei Akiva tappedStockholm to host this year's event in order to salute ScandinavianJewry and as a way to respond to growing local anti-Semitism andanti-Israel rallies.
Advertisement
Subscribe for our daily newsletter