London Sainsbury's store wishes Jewish shoppers a Happy New Year, with a picture of a bottle of grape juice - and a packet of matza! 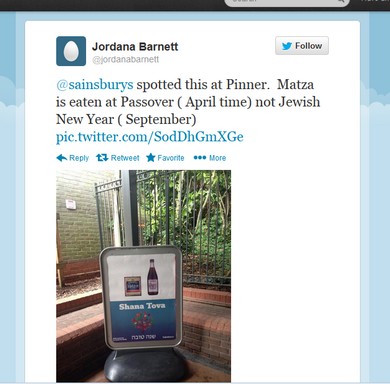 Technically speaking, the Torah does indicate that Nisan, the Hebrew month during which Passover falls each year, represents a New Year of sorts. As explained on MyJewishLearning:In the Torah, the beginning of the year was clearly set at 1 Nisan, in the context of a description of the first Passover. “The Lord said to Moses and Aaron in the land of Egypt: This month shall mark for you the beginning of the months; it shall be the first of the months of the year for you” (Exodus 12:1-2). This new year celebrated the creation of the Jewish nation through the redemption of the Israelites from Egypt. Nisan, as the first of the months, coincided with the beginning of Jewish national history.

Nevertheless, a Sainsbury’s associate responded via Twitter that he would notify the store.Sainsbury’s customer “Careline” made waves in 2011 for one associate’s heartfelt response to a three-year-old who wrote that the company should rename its “Tiger Bread” to “Giraffe Bread;” the change was implemented in 2012.In the case of the Rosh Hashana ad, perhaps we should take a cue from Israel-based comedian Benji Lovitt: if it ain’t broke, don’t fix it:
Advertisement
Subscribe for our daily newsletter