Just in time for Purim, Appaholic brings you four apps that will make this Purim just that much more interesting.

By ZOHAR FRIEDMAN
iphones R 311
(photo credit: REUTERS)
Advertisement
Purim is right around the corner. Do you have your costume ready? Are you well versed in what—exactly—Purim food is? Feeling a little rusty on the Purim story? Forgot to buy a gragger? Well, brave shopper, fear not: as always, your iPhone (or other app-supportive device) is here to your rescue.  For the kids 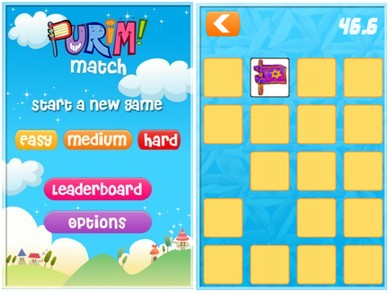 Purim Match app (Kosher Penguin LLC)
Want the kids to stop annoying you from the backseat? Need some help getting them into the Purim spirit? Pass your iPhone to your noise-maker and drive in peace. Kosher Penguin LLC brings you Purim Match, a Purim-themed memory game for you or your kids. While this game is not exactly educational, it pulls off the holiday theme nicely, has different difficulty levels, is timeable, and game-center supported for anyone who is feeling competitive.Cost: $0.99Supported formats:iPhone, iPod touch, iPadReligious 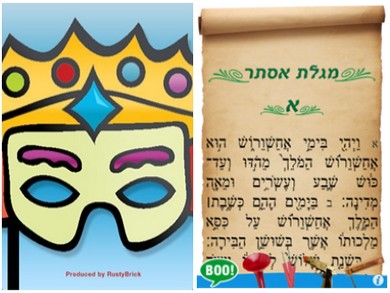 Megilat Esther app (RustyBrick, Inc.)
We're permitted to use electronics on Purim, so you can take your iPhone to synagogue and let it join the celebration. We're thinking specifically of RustyBrick, Inc.'s Megilat Esther app. This app both gives you the entire Megilat Esther text while also functioning as a gragger. The fun doesn't end there: Choose from a number of different gragger noises to scare off Haman, including fire-crackers and crowd-booing. Give your iPhone a shake and let it randomly generate one of the optional sounds. Cost: freeSupported formats: iPhone, iPod touch, iPadJust for fun 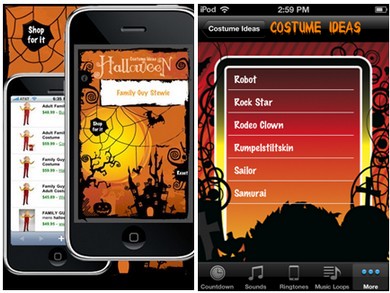 Halloween apps (courtesy)
Haven't had time to design a costume this year? We have two apps for you. While both of these apps were originally designed for Halloween, who says that costume ideas for Halloween aren't transferrable to Purim. The first, More Blu Sky's Costume Ideas: Halloween, randomly generates costume suggestions based on limited search criteria. Like the costume idea? Click "shop for it," and the app will take you to a Google product-search for your costume.The second app, Schatzisoft's Halloween, is for the craftier among us: This app shows you costume ideas in a list-format, and instead of taking you to a Google-product search, it takes you to an image search where you can find inspiration for how to throw your perfect costume together.  Cost: Costume Ideas: Halloween, $0.99; Halloween, free. Supported formats: iPhone, iPod touch, iPadFor the chef

Cooking with the Bible: Purim (courtesy)
Judaism is a faith of food, and Purim is no exception. Traditional foods for this holiday aren't limited to hamentaschen. Cooking with the Bible: Purim brings you a menu based on both the climate and location of biblical stories as well as foods traditional to Purim. Disclaimer: as the creators of this bible-based cook-book are not Jewish, some recipes in this application are not kosher. However, most are vegetarian, the few not kosher dishes are modifiable to fit a kosher meal, and all are delicious.Cost: $0.99Supported formats: iPhone, iPod touch, iPadAppaholic is a bi-weekly column which thematically reviews mobile apps with a Jewish or Israeli twist. If you have an app to suggest, send details to [email protected]
Advertisement
Subscribe for our daily newsletter