Ask the Barman: Deli does it

Itamar Green does a fine job behind the bar at one of Tel Aviv's best kept secrets.

By YONI COHEN
Itamar Green 390
(photo credit: Yoni Cohen)
Advertisement
Is it a deli sandwich bar? Is it a funky cocktail bar? Is it a house music club? Yes, yes and yes. A relative newcomer to the Tel Aviv bar scene, Deli Bar is all of the above and head bartender Itamar Green is proud to be a part of it all. Taking inspiration from secret bars such as New York’s trendy PDT, Deli Bar is accessed by walking through the back door of an unassuming sandwich bar on Allenby Street. Once through the doors, however, it’s a whole different story, with Itamar and his crew of skilled bartenders serving up a fine selection of cocktails and other drinks. Dubbed as a “home for house music” by its owners, Deli Bar has managed to pick up a couple of awards during its six months of operation.  With dreams to one day open his own drinking establishment, Itamar looks at ease behind the bar, serving freshly-made cocktails and charming the customers. When not staying up till the late hours making sure Tel Aviv’s partygoers have a good time, Itamar enjoys a more relaxed pace of life, kicking back with a movie or a good book. Having spent time in both New York and San Diego, he has has picked up skills working in various bars, and has even served the odd celebrity along the way. 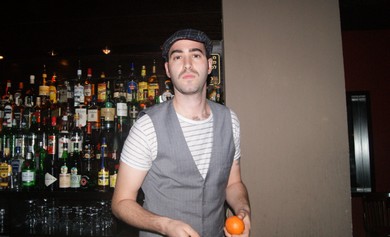 Itamar Green (photo: Yoni Cohen)
How did you get into bartending?When I was in New York City around eight years ago I went to a party and the bartender, a girl, sent me a note saying that she wanted to get to know me. So I thought why not? We went out for a few months and then she asked if I wanted to work behind the bar. I said yes, and then I just started working there. And you didn’t have any experience?No, I was very young. Just out of the army. Did you do any kind of course after you started?Yes. In New York City they sent me to a course to introduce to me the alcohol scene. What’s the craziest night you’ve ever had behind the bar?I’ve had a few. One night I stayed till very late, about 6 a.m., and there was this drunk guy at the bar. I asked him if he was okay and then at around 7 a.m. his mom came to pick him up. Very random. Who is the most interesting person you have ever served at a bar?Seann William Scott. I also served Justin Timberlake and Cameron Diaz.Which bar was that in?Lotus 14 in New York. What did they order?He [Seann William Scott] had a whisky and coke and they [Justin Timberlake and Cameron Diaz] had a bottle of champagne ordered to the table. 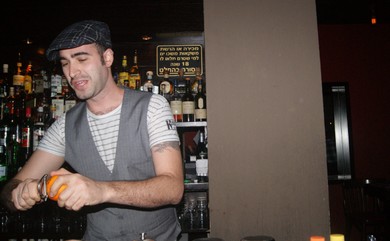 Itamar Green (photo: Yoni Cohen)
Who would be your ideal customer?That’s a very tricky question. I like to challenge people.  Warren Buffet.Why?He is a very smart guy and I could learn a few things from him, and if I gave him a few drinks it would be easier for me to talk to him.What would you serve him?My version of the “Old Fashioned.”Which is?It’s a Bourbon with a bitter and some orange. What is your favorite drink in general to make?Sazerac.What’s that?Well you wash the glass with ice and absinth inside and then you take Bourbon with Cognac together , add a little bit of sugar, add three dashes of Peychaud's Bitter and orange juice. Where did you learn to make that?A few places in New York. What’s your least favorite drink to make?Vodka Red Bull.Why?I think it’s horrible.I agree.It’s an insult to alcohol. 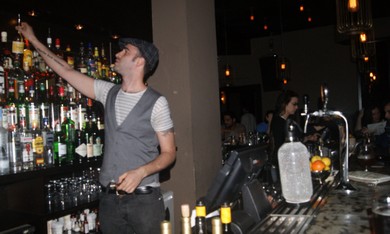 Itamar Green (photo: Yoni Cohen)
What do you think it takes to be a bartender?First, patience. Second of all, knowing how to act. Being behind the bar is the same thing as being on the stage. You have to leave all your troubles behind and come into the bar and start acting.What’s the best tip you’ve ever received?Wow. That’s a very good question. My best tip is valued not so much by the amount of money but more by the way I got it. It was in a bar at 4 a.m. on a slow Sunday night. I had a guy who came in to the bar after he had a fight with his wife. We sat down for about an hour and a half and had a full conversation because there was no one else in the bar. All he drank was one shot of Arak and he gave me NIS 200 as a tip. He told me that I made his day. Who would be your ideal drinking partner?My girlfriend. Good answer. Why?Because she knows how to drink. She is a whisky kind of girl. Do you have any tips for anyone who wants to be a bartender?Always be positive. I think the test of a good bartender is in a slow night and not a busy night. I think you can really show your true colors. Don’t try to be someone that you’re not. Try to be creative.Deli Bar, 47 Allenby Street054-520-4944Sandwich bar open from 7p.m., bar open from 9 p.m. till the last customer leaves.