Ask the Barman: Making everyone feel at home

Trainee lawyer Elad Polosetzky is happy that he's spending his last days as a barman at the "homely" Hamaoz bar.

By YONI COHEN
Elad Polosetzky at Hamaoz 370
(photo credit: Yoni Cohen)
Advertisement
Hamaoz in central Tel Aviv is the definition of a local neighborhood bar where customers are made to feel at home. On the surface Hamaoz looks like any other trendy local bar, but step into the back room and you'll be greeted by what looks like a fully functioning studio apartment, complete with shower, pool table and kitchen. People can sit around the coffee table on comfy couches, relax in the front of the television or even sit on the breakfast bar in the kitchen area while sipping champagne, or cava as it's in Tel Aviv.It's all about good times with good people at Hamaoz, and veteran barman Elad Polosetzky fits right in. With his laid back Israeli charm he takes it all in his stride and takes control behind the bar. While he is now somewhat a master of the trade and at the height of his bartending career, he will soon be packing up his cocktail shaker and handing in his bottle opener to become a professional lawyer. While he's looking forward to the new phase in his life, he says he'll miss the good people and the crazy times of his bartending days. This 28-year-old couldn't be happier to be ending his six-year career at Hamaoz, a place where he says he feels very at home, literally. 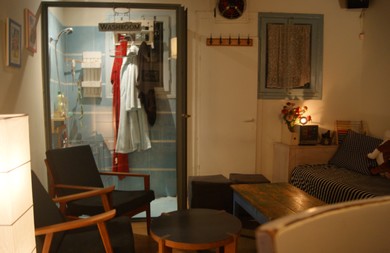 How did you get into bartending?I started after the army. All I wanted to do was have fun so I thought that bartending was the right path to follow. So how long have you been bartending for in total?Well I'm 28 now and I started just after the army at 22, so 6 years. What's the craziest night you have ever had behind the bar?Every New Years Eve is crazy at the bar. Also Purim is usually a crazy time.Why?Well everyone is usually dressed up and drinking. It makes for an interesting night. I know this Purim is going to be a crazy one. Pessah also can get crazy. Basically all the holidays. 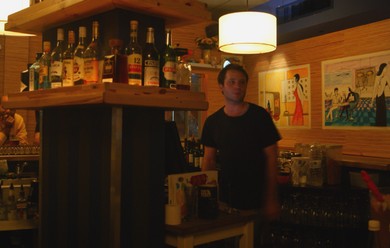 Who would be your dream customer?The love of my life.Who is that?I don't know. I haven't met her yet.What drink would you serve her?Whatever she wants. Good answer. What in general is your favorite drink to serve?When the customer tells me to go wild and make something special. I like making cocktails. What is your least favorite drink?Soft drinks. Why?You know, if you are coming to bar you should be here to drink properly. How many people try to hit on you in a night?Well it doesn't happen that often because there are more good looking barmen than me.Really?No, am only joking. But actually not that many people try to hit on me on the average night. 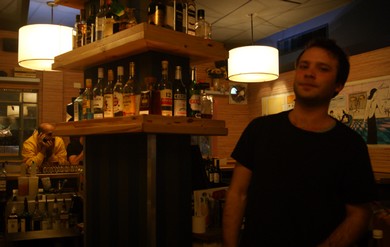 Any tips for anyone that wants to be a barman?Start to drink. It's important to know what it feels like to have a hangover. Do you drink a lot during your shift? Does it make it easier or harder to work?Easier to work but the next morning is harder. What do you do when you are not working behind the bar?I'm doing a law internship at the moment. I finished studying law last year. Once I've finished the internship I will start working seriously as lawyer. Tell me a bit about Hamaoz and the kind of people that come here?The best people. I'm not just talking about the most good looking women, I am talking about quality people who know how to have a good time. How long have you been here at Hamaoz?Almost two years. That's a relatively long time for a barman in Tel Aviv to stay in one place. Yes it is. Before I came here I changed jobs every couple of months. I really feel at home here and I think the customers also feel at home. That's the whole idea. Hamaoz 32 King George Street.03-6209458Email - [email protected] Open Sunday to Thursday from 8 p.m., Friday from 2 p.m. and Saturday from 6 p.m. till the last customer leaves.