Find out how eating pomegranates, apples and honey year round will help you achieve that healthy New Year.

By KATHRYN RUBIN
Buying honey
(photo credit: Reuters)
Advertisement
On Rosh Hashana we wish each other a sweet, happy and of course healthy new year. Nothing says healthy more than those symbolic New Year foods: apples, honey and pomegranates. Most of us are aware that apples are loaded with essential vitamins, have heard that honey boosts our immunity, and have read somewhere that pomegranate juice is chock full of antioxidants. However, when it comes to these three foods, the list of health benefits goes on and on. Here is a closer look at why eating apples, pomegranates, and honey 365 days of the year will truly help us achieve a healthy, and happy New Year. Apple of my eyeWe’ve all heard the saying that an apple a day keeps the doctor away. Apart from being a cute and catchy phrase, this saying is completely true, as an apple a day does in fact keep many disease and ailments at bay. Loaded with nutrients A to Z - particularly antioxidants and fiber - apples (as part of a healthy diet) have been linked with reducing the risk of cardiovascular disease and cancer. It’s true that many fruits and vegetables - particularly blueberries, broccoli and cabbage - have been linked with reducing the risk of certain cancers. However, very few foods have been shown to fight off lung cancer, except for apples. Researchers believe this is due to the high levels of the flavonoids quercetin and naringin in apples. But make sure not to peal your apples as the majority of the flavonoids are found in the skin. 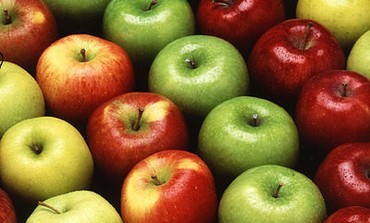 Wikicommons
If that wasn’t impressive enough, the level of quercetin in apples suppresses histamine production in the body, thereby preventing allergy symptoms from occurring. In addition to fighting off allergy symptoms, apples have also been linked with reducing asthma in children. A study found that those who consumed two or more apples a week reduced their risk of an asthma attack by nearly 33 percent.While researchers still remain puzzled by the apple-asthma connection, they believe that it has to be associated with the fruit’s specific antioxidant and anti-inflammatory nutrients. Apples are without a doubt one of the healthiest foods, and even fruits, you can eat. So don’t be shy to snag a few extra slices at the Rosh Hashana meal, and don’t forget to make this fruit part of your daily ritual.

Click for more JPost High Holy Day features
Packing a pomegranate punchPomegranates are a slightly odd fruit. Instead of eating the fruit part, as is done with an apple, we go straight for the hundreds of tiny seeds found inside. So what is so special about these seeds? Apart from being extremely low in calories and high in Vitamins C and K, they are loaded with fiber. There has been a lot of chatter about fiber lately, and how a diet rich in fiber foods, such as pomegranate seeds, (when part of a healthy diet) may aid in weight management. However, that’s not all, and clinical studies have found that pomegranate seeds and juice may reduce the risk of developing heart disease, heart attacks and strokes. This is due to the tiny seeds’ ability to thin blood, increase blood flow to the heart, lower the level of systolic blood pressure, reduce the formation of plaque on the arterial wall and lower LDL (bad) cholesterol levels. 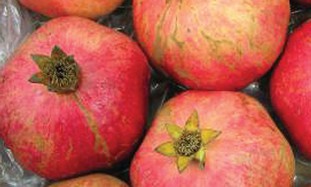 Courtesy Volcani Institute of Agricultural Research
If that wasn’t enough, pomegranate seeds and juice may also help us maintain a youthful glow. Rich in antioxidants, specifically ellagic acid (also found abundantly in raspberries), pomegranate seeds and juice may help to prevent collagen destruction which leads to the appearance of wrinkles and fine lines. Moreover, apart from helping to keep that youthful glow, pomegranate juice and seeds may also help to protect the skin from permanent sun damage, including the development of dark spots and even skin cancer.  Sweet for my sweet, honey for my health The most common, well known, and impressive, benefit of honey is that it boosts our immune system. However, honey is more than just a happy helper – it is an impressive fighter, and actually helps to rid the body of harmful bacteria. Whenever the throat feels a little sore, one of the first instincts is to curl up with a hot mug of tea filled with lemon and honey. In addition to soothing that achy throat, honey will actually help to treat it. Thanks to its antibacterial properties, honey will help to kill the bacteria that cause the throat to hurt and the rest of the body to ache. 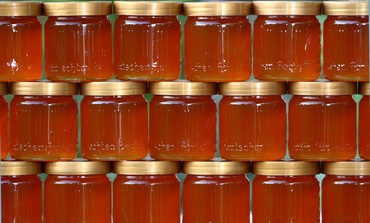 Wikicommons
The health properties of honey also extend upwards from the throat to treat sinusitis. One of the most common causes of headaches amongst adults, sinusitis occurs when mucous membranes in the sinus cavities become inflamed, causing a stuffy nose, difficulty breathing, and moderate to intense head and facial pain. So how can a teaspoon of honey help? Two studies recently found that manuka honey from New Zealand and sidr honey from Yemen were effective in killing the bacteria responsible for sinus infections, and even worked better than antibiotics. Like pomegranates and apples, the list of honey’s health benefits go on and on. However, there is one particular benefit that will prove most useful to some following the Rosh Hashana dinner and celebrations. A UK study found that honey helps the body break down alcohol into harmless by-products, rather than a toxic substance that causes those painful post drinking headaches – making it one of the best hangover cures. So if you are planning to indulge in the red wine during the festive meal, make sure to keep dipping those apples and halla in the honey.Follow @JPost_Lifestyle