By TOM LANGFORD
MARCH 13, 2012 16:59
Horsing around 1 370
(photo credit: Courtesy of Melanie Ellison )
Advertisement
Tom Langford is a commercial photographer, professional retoucher, and a website designer.This week we will look at a picture sent by Melanie Ellison of Colorado called “Horsin’ Around.” She asks for some advice - “how to make the horses in the background stand out better as the focus of the picture.” 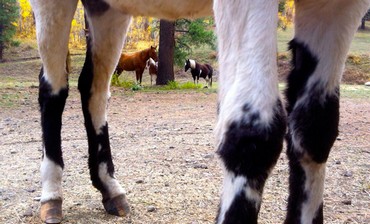 In asking this question Melanie shows that she has the critical sense that is essential if you are to progress in photography: In more photographic terms she asks how to make the distant horses work as the primary focal point of the picture?Melanie spotted a clever composition of horses framed by a horse, but the picture does not command our attention. When you take a picture, check the preview on the back of your digital camera - is it as interesting as the subject in front of you? In fact it should be even more absorbing since it is concentrated into a frame. Melanie identified the basic problem, so let’s see what she could have done to about it.Improving the pictureThe first option she could have tried is the obvious one – zoom in to make the horses bigger. The same effect can be achieved later by cropping the picture. Here’s how it would look: 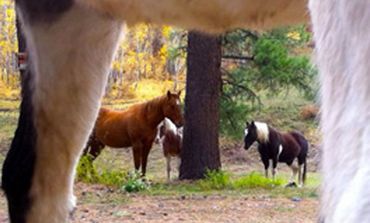 As you can see, this would not have been a very effective choice: Zooming in to the distant horses has cropped the foreground horse far too much; it is now a distraction rather than an asset to the picture. It also emphasizes the tree which seems to disappear into its belly.The next option would be the more sensible one; move further back from the horses and then zoom in. This would alter the relative sizes of the foreground and the background. The result would look something like the version I have retouched below: 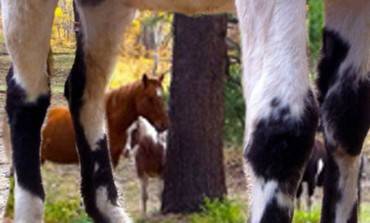 The background horses are now the primary focal point of the picture, which is what Melanie wanted, but the picture has not been improved much and the tree is still a major distraction.Using your imaginationIt’s now obvious that something radical has to be done if we are to create a good picture using this type of composition. What I suggest is that you use your imagination to visualize how an ideal version of this shot could look. Here is a rough retouch of how I imagine a successful version might appear: 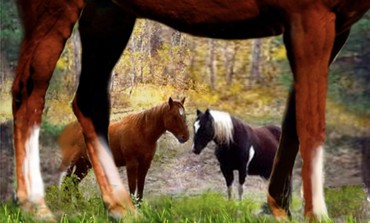 As you can see I have removed the distracting tree, brought the two main horses heads closer together, and placed a thoroughbred horse in the foreground.This shot is starting to work well: The background horses are now clearly the primary focal point and the foreground horse is seen side-on to make a cleaner and more formal composition.This type of shot would not have been possible in the situation that Melanie encountered, but if you can visualize an effective composition you can drop the attempt to shoot what’s impossible. You can then turn your attention to creating good shots from the subjects to the hand.The ideal picture can be kept in mind as a reference. You will then be more likely to spot an opportunity to take it, or something like it, in the future. A set upProbably the only practical way to take a complex composition such as this is if you set it up. You could ask for the cooperation of a stables in return for a beautiful picture they could use on their website and brochures. This isn’t cheating – almost every shot you see in an advert or magazine has been carefully set up. Photojournalists aren’t allowed to pose shots for obvious reasons but the rest of us can enjoy some artistic license.In 1950 the French photographer Robert Doisneau took a wonderfully iconic shot of a young couple kissing in a busy Paris street, “Kiss at the Hotel de Ville.” In 1992 it was revealed that this shot was posed by two actors but it is still a superbly evocative image of the French culture and looses nothing by being posed.The answer to Melanie’s question, “how to make the horses in the background stand out better as the focus of the picture” probably isn’t the one she was expecting to hear. Occasionally we’ll find a perfect composition just waiting to be shot, but the rest of the time we have to work hard to achieve effortless simplicity!
Send me your picture If you are aspiring to develop your photography skills, send me a picture and I will publish one at the end of my next article with some constructive feedback.  Send one picture only, at a reduced size to jpost@langford.co.il. Mention “cellphone picture."  Tom Langford is a commercial photographer, website designer, and professional retoucher. He teaches photography courses for beginners and advanced. Details of his courses and field trips at: www.langford.co.il/courses