By TOM LANGFORD
JANUARY 24, 2012 13:52
Tom Langford photo examples before 311
(photo credit: Andrea Krogmann)
Advertisement
Tom Langford is a commercial photographer, professional retoucher, and a website designer.I have previously mentioned how useful the Program (P) mode is for general photography, especially if you have a SLR. It can also be found on many modern compact cameras. P mode is similar to Auto mode. When you gently press the shutter button to focus, the camera will set a useful shutter speed and aperture. In both modes you can start shooting and concentrate on taking a good picture. Occasionally you will need to take control to choose a more appropriate aperture or shutter speed, but in Auto mode they cannot be altered. P mode is very convenient because the aperture and speed can be adjusted quickly and easily on most SLRs. Modern compacts vary enormously in their designs and this feature may be conveniently placed or be buried in the menus.With SLRs you normally rotate a “command dial” (usually a thumbwheel) to adjust settings without even taking your eye from the viewfinder. Spin it in one direction to select a larger aperture and faster shutter speed – spin it in the opposite direction to set a smaller aperture and slower shutter speed. This only takes a second and is far more convenient than fiddling about with your camera.Motion blur Here’s an interesting effect where the foreground subjects appear static and sharp while the rest of the shot shows blurred motion. 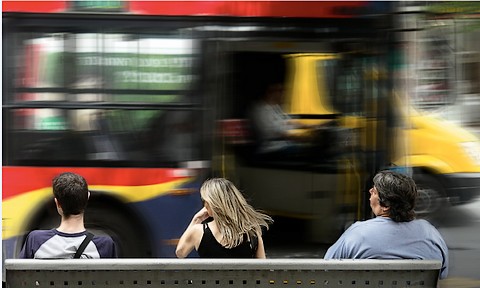 Photo; Tom Langford I saw this photo opportunity while walking in a busy Tel Aviv street. I wanted to capture the bustle of traffic contrasted against the stillness of the seated trio. I needed to do this very quickly, before anyone noticed or wandered off. In the early 20th century film cameras did not have internal exposure meters so photographers had to guess what apertures and shutter speeds to set. I used to amuse myself by practicing this and knew that the exposure here would be about F8 at 1/125 sec. To blur the background I would need a much slower shutter speed, perhaps ¼ to 1/8 sec and there was no time to fiddle with settings. Fortunately my camera was on P mode so all I had to do was to gently press the shutter button to focus then spin the thumbwheel to the left.I guessed that the slowest speed would not blur the traffic as much as I wanted so I improvised a neutral density filter by holding my sunglasses in front of the lens. This reduced the light entering the camera so the shutter speed would lengthen to compensate.Shooting at such a slow speed would result in a completely blurred picture unless the camera could be held completely steady. I pressed my shoulder to the side of a doorway and held the camera firmly with my elbows tucked in for stability. As I took the shot I briefly held my breath to prevent any chest movement. I managed to take about six shots as traffic sped by, then one of the trio started to turn and look at me. I had already lowered the camera and was replacing my sun glasses.The whole thing only took a few seconds, which is often the case with candid photography. Had I fiddled with camera, switching it to Tv (Time priority) mode, then adjusting the ISO to its lowest setting (to take the shot without using my sun glasses), then setting the slowest speed, I would probably have lost the shot. P mode certainly proved its worth in this case. It’s the quickest and easiest way to adjust time and aperture settings when occasionally needed. The people are not absolutely sharp in any of the shots, which is not surprising in the circumstances, but it was fun to take. For this type of trick shot a little bit of camera technique was necessary, but for the vast majority of general subjects it’s much more important to use your head to take the shot - your camera is simply a tool to record the image. Details of my five-step B.A.S.I.C system for taking Good Pictures will help and show you how to use your head. The more you understand what a Good Picture is the more fun you will have taking it.
Send me your picture If you would like to develop your photography skills, send me a picture with details of how you took it. I may share some constructive feedback for selected shots in one of my future articles. Please send one picture only, at a reduced size to jpost@langford.co.il.If you don’t how to send a reduced size photo by email see my Brief Guide to Picasa: www.langford.co.il/courses/PicasaGuide.html Tom Langford is a commercial photographer, website designer, and professional retoucher. He teaches photography courses for beginners and advanced. Details of his next courses and field trips at: http://www.langford.co.il/courses