By RONEN SHNIDMAN
SEPTEMBER 15, 2010 00:05
Ehud Netzer
(photo credit: Courtesy)
Advertisement
A royal box built at the upper level of King Herod's private theater at Herodium has been fully unveiled in recent excavations at the archaeological site, providing a further indication of the luxurious lifestyle favored by the well-known Jewish monarch, the Hebrew University announced in a statement released Tuesday.The excavations at Herodium National Park at the eastern edge of Gush Etzion region, were conducted by Prof. Ehud Netzer under the auspices of the Hebrew University of Jerusalem Institute of Archaeology.RELATED:
Pompeii's destruction: Godly retribution?
Israel’s Treasure TroveThe theater, first revealed in 2008, is located halfway up the hill near Herod's mausoleum, whose exposure in 2007 aroused worldwide attention. The highly decorated, fairly small theater was built in approximately 15 BCE, which was the year of the visit of Roman leader Marcus Agrippa to Judea, Emperor Augustus's right-hand man, according to Prof.  Nezter, who has been assisted in the excavations by Yakov Kalman, Roi Porath and Rachel Chachy.The royal box (measuring eight by seven meters and about six meters high) is the central space among a group of rooms attached to the upper part of the theater's structure. This impressive room likely hosted the king, his close friends and family members during performances in the theater and was fully open facing the stage. Its back and side walls are adorned with an elaborate scheme of wall paintings and plaster moldings in a style that has not been seen thus far in Israel; yet, this style is known to have existed in Rome and Campania in Italy during those years. This work, therefore, was probably executed by Italian artists, perhaps sent by Marcus Agrippa, who a year before his visit to Judea met Herod on the famous Greek island of Lesbos, said Netzer. 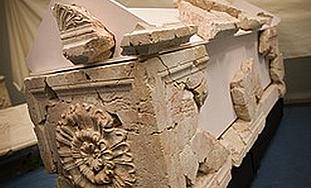 On the upper parts of the walls are the room's highlights: a series of unique “windows” painted with "outfolded" shutters on either side and various naturalistic landscapes within. They include scenes of the countryside, the Nile River and a nautical scene featuring a large boat with sails. One can identify features of trees, animals and human beings. Some of these windows have survived intact on the walls, whereas others were found in fragments on the floor and are undergoing restoration in the Israel Museum's laboratory.Painted windows with shutters appear in the late Second Pompeian Style in Italy, and mainly depict unrealistic views like theater settings and still-life. The closest parallels for the windows at Herodium are known from the "Villa Imperiale" at Pompeii, dated to the early Third Style of painting between 10 and 15 BCE, some of which were recently placed on display at the Metropolitan Museum in New York.The data accumulated during the excavation proves that the theater's lifetime was very short, less than ten years. It appear that the theater deliberately destroyed slight before Herod's death in order to preserve the conic shape of the artificial hill of Herodium. During the construction of the artificial hill (as well as the famous monumental stairway which begins at the bottom of the hill), parts of the theater, including the "royal box," were temporarily used by the builders, leaving their footsteps in the form of subdivision walls, cooking installations and graffiti.The Israel Museum in Jerusalem, which plans on launching the first exhibition featuring the finds from Herod's grave in the upcoming year, financed and undertook the complicated preservation work on the royal box. The royal box site at Herod's theater will be opened to the public once a special protective structure is built around the room when the theater itself undergoes a partial restoration.
Advertisement
Subscribe for our daily newsletter