Mad dogs and Englishmen out in the sun

The Megiddo Expedition delves into the secrets still of the Jezreel Valley.

By LYDIA AISENBERG
JULY 16, 2010 18:15
megiddo 311
(photo credit: Courtesy)
Advertisement
For over a century, archaeologists have been sifting dirt at Tel Megiddo , uncovering the remains of ancient buildings, streets and the way of life of many diverse civilizations crammed one on top of the other.With temperatures soaring and the sun beating mercilessly down upon them, over 100 young and not-so-young professional and amateur archaeologists, history buffs – and just plain adventurous and curious people – from many countries are once more delving deeper into the layers of secrets still held at Tel Megiddo.To date, evidence of 27 layers of civilization have been uncovered and recorded. Almost halfway through the present seven-week dig, there are high expectations of yet more hidden secrets of Tel Megiddo surfacing and being added to the history of this important site.The energetic diggers pursuing the past work in four groups under huge black awnings, their netting clearly visible atop and clinging to the steep-sloped sides of the tel from across the valley below.For some days, the teams have been encouraged by the visiting patron of the Megiddo Expedition, Lord Michael Allenby and his wife Lady Sara, from Britain. The couple have been staying at nearby Kibbutz Ramat Hashofet, together with the rest of the expedition members. 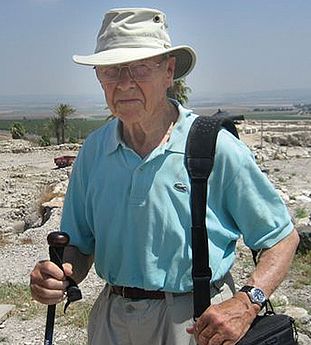 On site, at the crack of dawn, the teams work through until noon before returning to the kibbutz, perched on the Menashe Hills above the site. After lunch and a hardearned rest, the expedition members – hailing from Israel, Britain, France, Switzerland, Brazil and across North America – clean, number, photograph and ‘read’ the morning’s historic booty, buckets full of pottery shards and other artifacts.Their evenings are taken up with workshops studying archaeology-related topics and planning the next day’s digging.“We find it absolutely riveting to be here and see the work progressing so well,” said 80-year-old Lord Allenby of Megiddo, who has visited the site many times in the past and closely follows developments from back home in Britain.Standing atop the expansive tel, Lord and Lady Allenby were accompanied by British-born Israeli archaeologist Norma Franklyn, who filled them in on the day’s work.A long line of young people were passing buckets of earth up a hillside, where the last in line at the top of the incline unceremoniously dumped the contents in to a deep pit.Standing in the sun and grunting from the uphill effort to move the earth away from an area being excavated, the dozen or so global excavators worked quickly and in perfect unison. When the last bucket was up and over, they all collapsed to the ground – groaning and laughing at the same time. “Now isn’t that marvelous,” said Lord Allenby of the young people as he and his wife gingerly picked their way along one of the dusty, stony pathways between the areas under excavation.A hereditary peer, Lord Allenby inherited the title Viscount Allenby of Megiddo and of Felixstowe, Co. Suffolk. He is the great-nephew of Field Marshall Edmund Allenby, commander-in-chief of the British troops who in 1918 invaded the north of Palestine through the Megiddo Pass, eventually leading to the end of Turkish rule of the region.The remarkable tel was first excavated over 100 years ago by a team of German archaeologists, who were followed by teams from the Oriental Institute of Chicago with the financial backing of John D. Rockefeller Jr. Some of their discoveries were shipped to America.The first Megiddo Expedition of the Institute of Archaeology of Tel Aviv was in 1992. The present excavation – together with a consortium of American universities – is the 10th. Norma Franklyn, coordinator of the previous nine expeditions and of the current one, tells of many past expedition members becoming part of the extended “Megiddo family.” There have been marriages between folks who met on site, and friendships formed for a lifetime.“There are those who have come back a second and even third time to join in another dig – and this year, we have a couple who met here in the past, are now married and here again, but this time heavily pregnant! They are hoping that their child will be born in Israel – although hopefully not here on site,” says Franklyn with a smile.One of the team working in an area known to be from the Iron Age is Ian Cipin of Barnet, London. Cipin, studying for a Masters in Archaeology of the Eastern Mediterranean and Middle East, came to dig and discover at Megiddo the first time in 2006.“I had always wanted to dig in Israel, but other things cropped up instead. But in 2006 I jumped at the opportunity,” explained Cipin, who is Jewish and has relatives in the country.
“My first dig was many years ago in Essex, England, and quite unforgettable as I sweated for a whole week and found nothing. In the last few hours of the dig, I discovered one really small piece of pottery.“Here at Megiddo,” he says spreading his arms wide across the site, “they come up every day by the bucketful!” Visiting the site was Dr. David Mendelsohn, a Canadian archaeologist and linguist who recently made aliya with his family to settle in the town of Karkur, a short distance from the ancient site of Megiddo.“Standing on a tel built upon many layers of civilization and that has witnessed at least three major battles, the earliest of which dates to the 15th century BCE and the last as recent as in the 1900s, is inspiring in its own right,” said Mendelsohn.“However, being here with Lord Allenby is especially poignant as it was his uncle, the previous Lord Allenby, who was victorious over the Ottomans in the last battle fought here – and that is really powerful,” he added.
Advertisement
Subscribe for our daily newsletter