Gold(bergs) in them thar hills

Deadwood, South Dakota - famous as the home of Wild Bill Hickok and Calamity Jane - was once home to a small but thriving Jewish community. 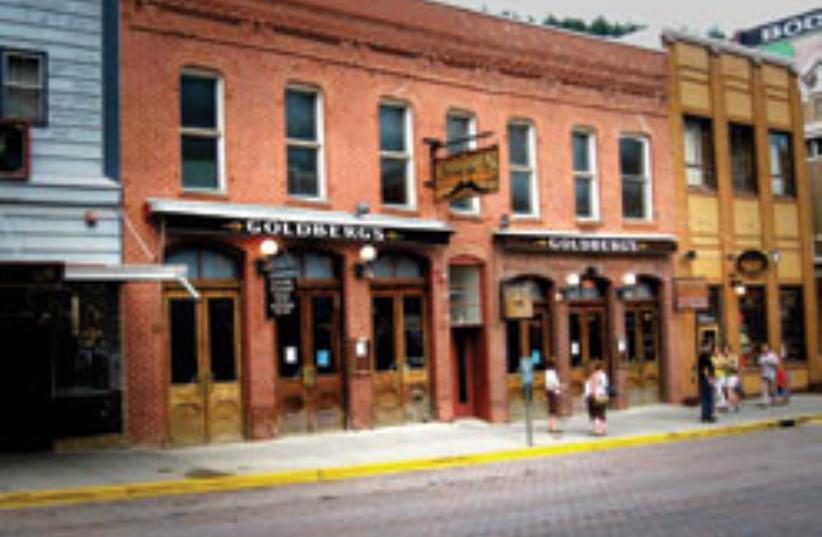 For fortune hunters looking to strike it rich in Deadwood, the gold is no longer in "them thar hills," but rather in the many casinos lining Main Street. For history hunters, though, especially those interested in Jewish history, a visit to this South Dakota city offers great treasures. Just a quick dig at the surface reveals that Deadwood's past is intimately connected with the Jewish community that called this once rough-and-ready mining town home.

Deadwood was established in 1876 during the Black Hills gold rush. The Jewish population of Deadwood, which numbered in the hundreds at its peak, was drawn to the lawless frontier less for the chance to strike it rich on the gold claims (though Jewish prospectors undoubtedly tried their luck with everyone else) and more for the auxiliary services they could provide the growing town. Such was their success that about one-third of all the early buildings on Main Street were owned or occupied by Jewish merchants. These were mostly traditional Jewish enterprises such as dry goods or those related to clothing.

The wooden huts and muddy streets where the first Jewish inhabitants conducted their business are long gone - gold rush-era Main Street burned down in a fire on September 25, 1879. Long gone too is the licentiousness and vice that characterized the infamous mining town. Today's Deadwood is a sanitized echo of its notorious past. While gambling remains a major pastime (there are some 80 historic gaming halls), modern Deadwood is a combination of Disney's Frontierland, complete with swing door saloons and "period" photographers, and an aging seaside resort where tacky memorabilia and taffy stores jostle for space.

A visit to Jewish Deadwood should initially ignore the gambling establishments on Main Street and begin instead with a foray up the steep hill overlooking the town where Mount Moriah cemetery - Deadwood's Boot Hill - is located. While many of the approximately two million tourists who visit Deadwood annually visit the cemetery to see the graves of two of the Wild West's best-known characters, Wild Bill Hickok and Calamity Jane, the graveyard is also the final resting place of a number of the town's Jewish citizens.

EVEN BEFORE entering the cemetery (admission $1, which includes a walking tour guide and map), the gates indicate a Jewish presence. Three metal circles adorn the entrance. The circle on the left contains three smaller circles, possibly signifying the trinity of Christianity; the middle circle encloses a triangle, either a well-known Masonic symbol (many of the cemetery's founders were Masons) or a nod to the Black Hills that surround the city, while the circle on the right surrounds a Star of David.

Established in either 1877 or 1878, Mount Moriah replaced a smaller cemetery situated further down the hill. On August 28, 1892, the Hebrew Cemetery Association purchased a section in the new cemetery for Jewish burials for the sum of $200. Hebrew Hill, as the Jewish area was called locally, is located at the top right-hand side of the cemetery and is accessible via a pathway marked "Jerusalem," which is most likely a Masonic, rather than a Jewish, reference.

While there are more than 80 Jews buried up on Hebrew Hill, or Mount Zion as it was known among the community, Deadwood's most famous Jewish citizen, Sol Star, is not among them. In accordance with the wishes of his family, Star lies in the Mount Sinai Cemetery in St. Louis, Missouri. Two hundred and fifty meters up from the Jewish section lies the grave of Deadwood's first sheriff and Star's long-time friend and business partner, Seth Bullock.

Among the Jews who are interred on Hebrew Hill is Harris Franklin, né Finkelstein. Franklin was said to have been Deadwood's wealthiest man, having made his fortune - estimated at $5 million - from the liquor business and the mining industry. Given his status and wealth, it is unsurprising that the Franklin headstone is the largest in the cemetery. His name is perpetuated in Deadwood through the Franklin Hotel in which he was the largest investor. The Franklin name is also prominent in the city's annals owing to Harris's son, Nathan, who became the second Jewish mayor of Deadwood in 1914, running on an anti-Prohibition platform.

Also buried in the cemetery is the Colman family, who arrived in Deadwood from Germany in the spring of 1877. In 1878, Nathan Colman (born Kugelmann) was appointed justice of the peace, an office he held until his death in 1906. Colman was also the lay religious leader for the Jewish community and officiated at the first Jewish wedding in the Black Hills, when Rebecca Reubens married David Holzman on November 4, 1879.

Tragedy, however, was never far from the Colmans. The family's tobacco and grocery store burned down in the fire of 1879. Even more devastating, as their simple headstones attest, four of the Colman children died of diphtheria and other diseases. As if that was not enough, in 1894 the family lost both their home and their store in another of the fires that swept through the town.

Even with all these setbacks, Blanche Colman, who was born in Deadwood in 1884, graduated from Deadwood High School in 1902 before working as a secretary to South Dakota Congressman Parker in Washington DC. She returned home to take a job in the law office of Chambers Kellar, the son-in-law of Seth Bullock. Even though the indomitable Blanche never attended college, by dint of studying on her own, in 1911 she was admitted to the South Dakota bar at the age of 27, becoming the first female lawyer in the state. She died in Deadwood in 1978 at 94.

OTHER THAN the graves, the cemetery offers another point of Jewish interest. Situated close to Wild Bill Hickok's grave, at the bottom of the Jerusalem path, stands one of three markers established by the Deadwood Historic Preservation Commission in conjunction with the Jewish American Society for Historic Preservation. The sign, which was dedicated on April 1, 2005, records information about the purchase of Hebrew Hill and some of those buried there.

In reference to Nathan Colman, the marker quotes The Black Hills Daily Timesendorsing Colman's reelection as justice of the peace: "If you want an honest (man) elect Judge Colman. He is no slouch... He is a Western Man."

A second marker is located at the corner of historic Main Street and Wall Street across the street from the present-day Bullock Hotel, which stands on the site of Seth Bullock's and Sol Star's hardware shop, which burned down in the same 1894 fire that destroyed the Colmans' home and store. The third is at the Adams-Franklin House, which was built for Franklin in 1890 by Simeon Eisendrath, a New York synagogue architect of some standing, and talks about the Franklin family. While the sign in the cemetery is easy to find, it is best to know the location of the other two in advance because the central information center on Main Street seemed unaware of their existence.

The sign on Wall Street, which discusses the Jewish pioneers of Deadwood, also shows a map of places of Jewish interest along Main Street. Unfortunately, it does not provide any real detail. Used in conjunction with a map of Main Street, available from the information center, it is possible to work out where the buildings of Jewish interest lay. These include the Masonic Temple where the community prayed - Deadwood never had an official synagogue building - and many business buildings bearing distinctly Jewish names. Among there are Goldberg's Grocery Store, which Jacob Goldberg started in a tent in 1876 as the Big Horn Grocery (Goldberg's Casino stands in its place today), Rosenthal's Palace, Sol Bloom Building and Levinson Block.

The Jewish community, which had such an impact on the early days of Deadwood, no longer exists. Its members died or moved away to larger towns and cities when the prosperity of the gold rush years ended. Nevertheless, the town's Jewish inhabitants are still remembered. Along with the graves on Hebrew Hill, memories of the community are kept alive in Rapid City, South Dakota. The city's Reform congregation - the Synagogue of the Hills - uses the Deadwood Torah, which made its way to America from Koenigsburg, Germany, in 1886 and according to the synagogue's Web site, the names of Blanche Colman and her sister Theresa are read out on the Yizkor list each Yom Kippur.