Succot, the only festival in which the nations of the world were also invited to take part, binds and bonds human beings.

By DEBORAH S. DANAN
OCTOBER 11, 2012 12:37
Jam session in public succa
(photo credit: Moshe Goldberg)
Advertisement
This Succot might as well have been sponsored by Nokia. It was all about connecting people. Which is what Succot is all about and is probably the reason it’s my favorite festival on the Jewish calendar. The three pilgrimage festivals – or regalim, as they’re known in Hebrew – all represent landmarks in the Jewish life cycle. Passover represents birth: The children of Israel were freed from slavery and the Jewish nation was born. Shavuot symbolizes the bar mitzva of the Jewish nation: It is the festival of coming of age, where Jews begin to assume accountability for their actions following the acceptance of the Torah and its mitzvot. Succot represents marriage, with its main aspect being connection.Interestingly Succot is the only festival in which the nations of the world were also invited to take part.Even today, Christians come to Jerusalem for the Feast of Tabernacles.Succot is a festival that binds and bonds human beings. It is also a leveling festival – that is to say, in the succa, all people are equal. In that simple construct, the richest Jew is on the same level as the poorest Jew.So in the spirit of the festival, this year a group of young entrepreneurial Tel Avivians – myself included – came together to build a public succa in Atarim Square, just above the Tel Aviv marina. A permit was procured from the municipality for the construction of the succa and a Facebook group was created to announce the activities that would take place therein.All different types of Jews frequented the succa during Hol Hamoed (the intermediate days of the holiday).Study sessions were set up during the daytime and different functions hosted in the evenings. These included lectures and discussion groups by local rabbis, and on the third night, there was an evening of traditional foods from different nationalities in the succa. To the delight of the attending masses, a local Tel Avivian with a passion for cooking prepared delicacies from Moroccan, Yemenite and Kurdish cuisines.On Thursday night, I arranged a jam session in the succa to mark my one-year anniversary of moving to Tel Aviv. A motley crew of musicians arrived for what turned out to be a musical mash-fest that only ended at 3:30 a.m. I even managed to convince quite a few friends to come from Jerusalem – not an easy feat, since so many Jerusalemites are averse to making the long and arduous journey to Sin City. Following the sounds of guitars being strummed, passersby also joined the fray. 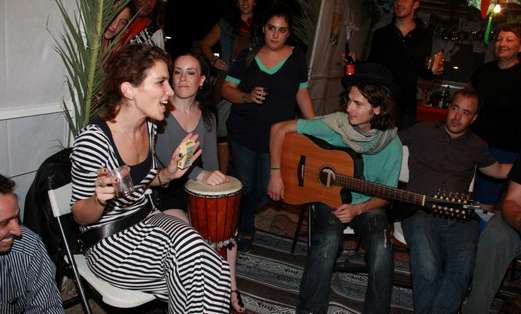 Jam Session in Public Succa Atarim Square (Photo: Moshe Goldberg)Once again, the crowd was made up of all different types of Jews: olim and Israelis, religious and secular, rightwingers and left-wingers – all drinking wine and belting out Beatles classics and Israeli ballads of yesteryear.On Shabbat of Hol Hamoed, some 60 people showed up for a Friday night meal, and during the day there was a huge kiddush in the succa with over 100 people in attendance. I remained in the succa for much of the day, encouraging passersby to stop inside and have a bite to eat. Many of them were clad in bikinis, having just come from the beach, and quite a few of them admitted not to having stepped into a succa for years. 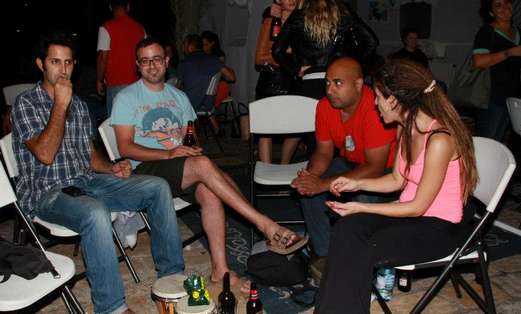 Jam Session in Succa Atarim Square (Photo: Moshe Goldberg)HOSHANA RABA marked the last night of activities in the succa with an all-night learning program. The following day, Succot was ushered out and Simhat Torah took its place.I was unsure about where to spend Simhat Torah. I thought about joining the masses and ascending to Jerusalem, but I was nervous because, due to overcrowding in shuls and a lack of planning, Simhat Torah in the Holy City is somewhat of a hit-or-miss holiday. I decided to go for the safe option and head to a friend’s house in Mevo Modi’im, which is what I’d done in previous years. And I’m glad I did.Mevo Modi’im is officially called Meor Modi’im, but for the people who live there, it is simply known as “the Moshav.” It was founded in 1976 as a “moshav shitufi” – cooperative village – by Rabbi Shlomo Carlebach, who lived there later in his life. As Wikipedia sagely notes, the Moshav comprises a “remarkable collection of eclectic individuals, including musicians, artists, organic farmers, wine makers, perfumers and specialists in many areas – many of whom are among the very best in their field in all of Israel.”But perhaps the most remarkable thing about the Moshav is its uncanny ability to unite people from all different walks of life. Many olim are used to meeting Jews from all corners of the Diaspora at Shabbat or festival meals. What’s amazing about the Moshav is that it provides a rare forum in which Jews from all over the country can gather at one table as well. Indeed, this Simhat Torah I was at a meal that included a second-generation American from Efrat, a national-religious Israeli from Peduel and a staunchly Moroccan Jew from Ashdod. In accordance with Israeli tradition, poking fun at the “foreign” other was the order of the day, albeit in good humor.The Simhat Torah prayers were conducted in classic Carlebach melodies and finished at 3:30 p.m. The seven hakafot – rounds of dancing in a circle around the Torah scrolls – was a euphoric event for all in attendance. For the fifth hakafa, all the worshipers abandoned the synagogue and encircled the entire periphery of the Moshav, dancing and singing at the top of their lungs.But perhaps the most special event was the penultimate hakafa, in which many of the residents left the settlement and, armed with a Torah scroll, they headed toward Zachor – a historical site located just next to the Moshav, near the Maccabean caves.The site commemorates those who perished in the Holocaust from the city of Zaglebie, Poland, and it has a monument with their names. A glass encasement embedded in the stone wall of the edifice houses a piece of parchment from a Torah scroll rescued from a synagogue in Zaglebie.It is apt that the Moshav residents choose to come to a Holocaust site to dance a hakafa on Simhat Torah, but this is not the main reason they come. The site, which has tall trees surrounding manicured lawns, attracts a fair number of secular Israelis who come to barbecue and enjoy the sunshine.In full song and dance, the Moshavnikim descend on the site and encourage the picnickers to join the circle. It’s a spectacle that moves me to tears every year I’m there.This year, the Torah scroll was handed to a young secular girl who clutched it with fervent piety to her heart as the other women danced around her. Unwilling to relinquish it, she held the scroll for most of the duration of the dancing.After the dancing, the Torah scroll was unrolled on a stone wall, and one by one, whoever wanted to receive an aliya – a chance to read from the Torah – was invited to read the blessings. These were people who would not otherwise have had the opportunity to participate in Simhat Torah festivities. Illustrating their lack of knowledge was the following amusing anecdote: A member of the Moshav asked one boy what his name was, to which he responded, “Ohad.” The Moshavnik then asked, “Ohad ben...?” – expecting the boy to give his father’s name. But the boy misunderstood and answered simply, “Ohad ben ehad esrei” – giving his age instead.One man came up to me after reading the Torah blessings, and in a choked voice said, “You don’t understand what this means to me. You’ve made my year.”Perhaps, then, that is what Simhat Torah – the rejoicing of the Torah – is all about: taking the Torah out of the synagogue and bringing it to the people who might otherwise never have the chance to celebrate it.On motzei Simhat Torah, I attended hakafot shniyot – hakafot for those celebrating a second day of the festival – in the Barby club in South Tel Aviv. Usually a club that hosts rock concerts, every motzei Simhat Torah the club turns into a party for the religious and secular masses. This year, a band called Nosei Hakelim played Jewish music from the stage, while the mosh-pit was full of men dancing with a Torah scroll. In another room, all manner of women danced in circles of ecstasy.The event was hosted by Rosh Yehudi, a Jewish learning center in central Tel Aviv, and was broadcast live on Army Radio. So there you have it. Succot/Simhat Torah in the brand new year of 5773: Connecting people. 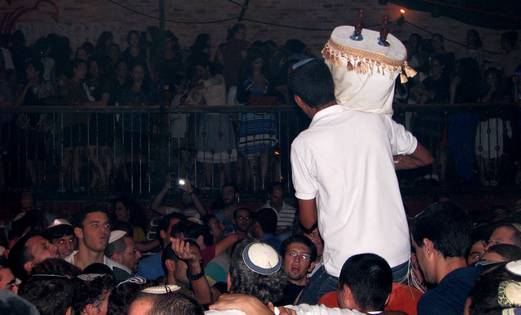