Egypt: Polls open in third round of elections

Concluding round of voting to lower house of parliament set to take in parts of south, which has largest proportion of Christian voters.

By REUTERS
JANUARY 3, 2012 09:00
Egyptians vote in elections 311
(photo credit: Reuters)
Advertisement
CAIRO - Polling stations opened in the third round of Egypt's parliamentary election on Tuesday, state television reported.The election is the first since the overthrow of President Hosni Mubarak in a popular uprising.RELATED:
IDF fears border attacks after Egypt electionsThe concluding round of voting to the lower house of parliament was set to take in parts of the rural south, which has the largest proportions of Christian voters, populous industrial Nile Delta areas north of Cairo and the restive Sinai desert region to the east.The Islamist Muslim Brotherhood's party list won the biggest share of seats in the first two rounds, its message of stability apparently finding resonance among ordinary Egyptians tired of almost a year of political turmoil. 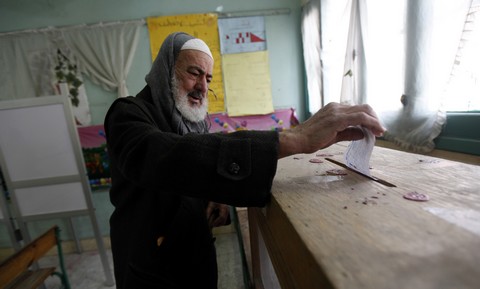 Bayoumi went on to say that the Muslim Brotherhood would take legal procedures towards canceling the peace treaty between Egypt and Israel that was signed in 1979.“The Brotherhood respects international conventions, but we will take legal action against the peace treaty with the Zionist entity,” he told the paper.JPost.com staff contributed to this report.
Advertisement
Subscribe for our daily newsletter