By JOSEPH MAYTON / THE MEDIA LINE
Egyptian veiled woman 311
(photo credit: Reuters)
Advertisement
GIZA, Egypt - It is an exciting time for Egypt as the country headed to the polls again this week for another round of parliamentary elections in what is being widely hailed as the first free and fair vote in decades. But for Egypt’s women, who make up 52% the country’s eligible voters, the polling is less fair than they had hoped. Women have guaranteed places on the parties’ voting lists, but that doesn’t ensure them a seat in the new parliament because female candidates are typically placed so low on the lists that they fail to make the cutoff. Islamist parties are discouraging women from taking public roles altogether. The Salafist Al-Noor Party, forced by the law to run women candidates, declines to publish pictures of its female candidates in its campaign material, putting flowers or the group’s electoral symbols in their place.RELATED:Egyptian women fret as 'modesty' becomes election issueOpinion: Egypt’s revolution was stolen from the women     In Egypt, a film sparks debate about sexual harassment“I don’t get it. This election will be praised and yet we will sit and wait to be told what to do, just like under the Mubarak government, maybe worse,” Omnia Radwan, a 24-year-old graduate student told The Media Line. The step backward for women in politics come amid a broader pushback from early days of the revolution when women protested side by side with men at Tahrir Square demanding the ouster of President Husni Mubarak. Since then, Islamists have emerged as the overwhelming victors in the elections and are increasingly setting the tone for social and political discourse. The new parliament will oversee the writing of Egypt’s constitution, ensuring that its influence will be felt for years to come. 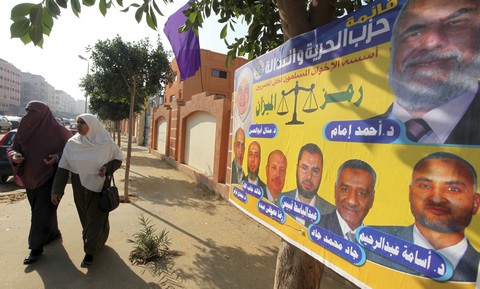 That portends a setback for Egyptian women, who have long faced an uphill struggle for equality. In 2010, when the more secular Mubarak regime was still in power, Egypt ranked 120 out of 128 countries in gender equality by the World Economic Forum. Indeed, the US is concerned enough about what is happening that Secretary of State Hillary Clinton weighed in a week ago with a reminder that US expects Egyptian parties  to uphold human rights, including women's rights.Although post-Mubarak elections have been judged democratic by observers both in Egypt and from abroad, for women they offer fewer opportunities than they had in the last years of the Mubarak era. An amendment to the electoral law approved last October did away with a quota of 64 seats for women in parliament with a looser requirement that each party list include at least one woman.Although 376 women ran for parliament in the first round of elections, only three won a seat – and those races were in relatively liberal, urban parts of the country. This week’s second round and the third round in January include rural and more conservative districts. The Egyptian Center for Women’s Rights has condemned how women have been portrayed in the campaigns, and has been extremely critical of the female role in political parties. The organization called it “weak nominations leading to weak representation,” adding that parties nominated women out of “obligation and according to the parliamentary law that site at least one female candidate must be present on each list.”“Sure, it is exciting, and I voted, but the fact remains, women are not being elected and we are going to see a difficult path forward if it is men, mainly conservative men, running the country,” said Radwan.

Click for special JPost coverage
Nawal Saadawi, arguably the leading feminist thinker in the Arab world, said that without women there would have been no revolution, and now, without their being fully engaged in electoral politics, those gains risk being reversed. “Women are half the society and they must be given a voice and be part of the change that is happening in the country,” she said.But there are many women in the country who feel that women should take a back seat, almost subservient role in politics, to men. At one polling station in Giza on Wednesday, a group of elderly women marched their way into the polling station shouting that the Muslim Brotherhood’s Freedom and Justice Party is the party of choice and urging fellow female voters to cast a vote for the Islamist group.“We believe that a woman’s duty is to take care of children and this should not be forgotten,” said one of the women as they left the station. “If women are in politics and power it corrupts them and it hurts the family and we believe that Islam tells us to be mothers first.”Earlier this week in Aswan, Al-Noor – which took more than 20% of the first-round voting – said that if it were to come to power, women would be barred from wearing bikinis on beaches and it would impose public segregation of the sexes. However, not all women in Egypt share this view. In Alexandria, a group of female activists called for a parallel parliament to be established that would promote women’s rights.Organized by the Association for the Development and Enhancement of Women in Alexandria outside the Alexandria Library, the participants called for rescinding discriminatory laws, greater access to literacy classes and social insurance for female agricultural workers and domestics.  The protest followed a roundtable discussion in collaboration with the law school at Alexandria University under the banner “women rights are human rights.”Radwan, who was assaulted by passersby last summer during a women’s rights rally in Cairo, said “the revolution will not be complete” until all Egyptians, including women, have a say in the future of this country. “If they want to ignore half the country, we will not stand by and be silent. I have been disappointed that activists have let women’s rights slide, but now we are seeing how this has hurt the country and it is time to move forward.”
Advertisement
Subscribe for our daily newsletter