By OREN KESSLER
Syrian protest 311
(photo credit: REUTERS)
Advertisement
Syrian forces killed 25 people on Thursday in several locations nationwide, including in cities being visited by Arab League monitors hoping to end the government crackdown on protests.Rights groups said six people died in Hama, a major hotbed of unrest, around the time monitors were entering the city for the first time. An additional four people were killed in the Damascus suburb of Douma, they said, and at least 100 were wounded in cities around the country by forces loyal to President Bashar Assad.RELATED:Arab League observers fan out across Syria'Syrians refuse to meet monitors in hotspot area'Salman Shaikh, director of the Brookings Doha Center in Qatar, said the monitors had gotten off to a disappointing start.“What’s clear is that we’ve not had a withdrawal of the army in any serious way or an end to regime-inflicted violence,” Shaikh told The Jerusalem Post by phone from Beirut. “I’ve heard from reliable sources that the monitors are not entirely happy with the access they’re getting – or even their own logistics and safety – and of course [with] the prying eyes of the regime.”The Arab League mission sparked controversy on its very first day in Syria when its Sudanese chief, Lt.-Gen. Mustafa al-Dabi, reported seeing “nothing frightening” in an initial tour of Homs.In that central city – Syria’s third largest and the center of anti-Assad ferment – protesters were already fed up with the monitors, who they said seemed unsympathetic and hard to find.

Click for full JPost coverage
“This mission is a big lie. They say they were in Khalidiya neighborhood. I haven’t seen them,” an activist named Tamir told Reuters, shouting by telephone over protesters’ chants of “down with the regime.”“Citizen journalists observing the observers will have quite an impact on the credibility of the mission,” Shaikh said. “If [Dabi] keeps talking, it will be one of the reasons no one will believe the mission – it will be one of the monitors’ weakest links.”The observers aim to supervise conditions in the turbulent cities of Deraa, Hama and Idlib, which lie along a 450-km. arc from the south to the north of Syria.In Hama, activists said protesters went out into the streets to await the delegation as security forces deployed in large numbers in the area. The city was the scene of a 1982 siege against Islamist rebels that left tens of thousands of people dead.In a video uploaded on Thursday, activists filming regime snipers lurking on rooftops in Hama appeared to come under fire and then turned their camera to show protesters carrying away a wounded man, a trail of blood dripping behind him.Activists in the northwest city of Idlib tried to reach out to the delegation, with little luck.“We got five [phone] numbers but the reaction we got from those people made us feel they were pro-regime.However, three monitors have contacted us to say they plan to visit us secretly, in private,” an activist named Munahal said. “They can’t bring their team; that means the security would come too.” 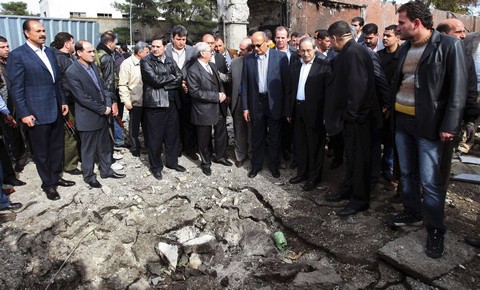 Arab League monitors in Syria inspect damages (Reuters)
Around 150 monitors in all are expected to enter Syria by the end of the week. But activists say government or security officials escorting monitors can intimidate residents who want to testify about the violence.They also say there are not enough monitors to see the full scope of unrest in a large country of 23 million people.An international peace mission in Kosovo in the late 1990s deployed 2,000 observers in a territory with 2 million people.As the body count mounts – independent observers put the death toll at at least 5,000 – opposition groups have increasingly been calling for Western military intervention.One option is the setting up of a “safe zone” on the Turkish border to help civilians fleeing the bloodshed.“My personal view is it’s long overdue,” said Shaikh, who attributed stalling in the UN Security Council to opposition by veto-wielders Russia and China. Shaikh, who is British, was part of a UN team monitoring the implementation of a 2006 Security Council Resolution on a cease-fire between Israel and Hezbollah that ended the Second Lebanon War.“My worry is that because we don’t have these things in place already, or at least the mandate for them, the diplomatic efforts may not keep up with the situation on the ground,” he said.“Setting up safe havens – let’s not kid ourselves – would be military intervention by itself. Once militaries are involved, these things can take on a life of their own.”Reuters contributed to this report.
Advertisement
Subscribe for our daily newsletter