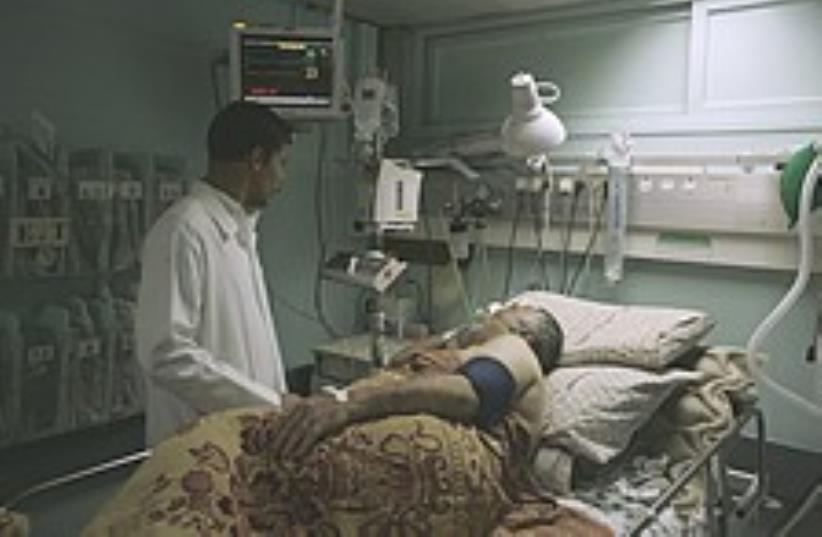 Gazans have limited access to proper medical supplies because of an Israeli blockade on the Hamas-controlled region, and equipment now in use is often broken or outdated, the World Health Organization said Thursday.

While some medicines are allowed in for humanitarian reasons, importing spare parts or new medical devices into Gaza is limited, a WHO official said. Also, the UN agency said, well-meant donations are not helping.

"The main issue here about the blockade is that it undermines the supply system as a whole," Mahmoud Daher, the head of WHO's office in Gaza, told a news conference in Jerusalem.

During Cast Lead, Israel's three-week operation in Gaza in December and January, aimed at stopping daily rocket attacks, two health care facilities were destroyed and others damaged, but the WHO said health care has since returned to prewar levels.

Israel closed off Gaza's borders two years ago after Hamas' violent takeover of the Mediterranean region. Only food and humanitarian aid is allowed in for the 1.5 million Palestinians living there.

Israel and Egypt have placed stringent restrictions on other goods and raw materials coming into Gaza.

Israel has said the reason for the blockade is to prevent raw materials from falling into the hands of Hamas, which is labeled a terror group by Israel, the US and Europe.

Equipment like X-ray machines and batteries are particularly difficult to get through the blockade, along with construction materials and upgrades for high-tech and expensive equipment, the WHO said. Maintenance staff and equipment suppliers are not able to move freely between Gaza and the West Bank to receive training on maintaining the equipment.

Also, devices that require repairs are often scrapped or kept in use despite their deficiencies because of the difficulty in shipping them out of Gaza to be fixed, the WHO said.

Foreign Ministry Spokesman Yigal Palmor called the WHO claims "dubious" and said: "There are no restrictions on medical equipment or medical supplies, nor have there ever been restrictions."

A WHO document distributed at the news conference said the situation would not improve unless Israeli restrictions are eased, but added, "internal (Palestinian) reforms in the health system would resolve some of the problems."

The report also noted difficulties caused by the mass resignations of Gaza doctors, nurses and hospital staff after the Hamas takeover of Gaza in 2007.

Well-intentioned foreign donations of medical supplies since the end of Operation Cast Lead have often been unhelpful.

"Uncoordinated donations have led to an excessive volume of unwanted and inappropriate equipment," Daher said.

About 500 tons of donated medical supplies, worth about $2 million, will go unused because they are not needed or do not meet Health Ministry standards, he said.

In related news, the IDF is currently reviewing close to 100 complaints accusing soldiers of criminal conduct during the assault on Hamas in the Gaza Strip earlier this year, The Jerusalem Post has learned.

IDF Judge Advocate General Brig.-Gen. Avichai Mandelblit, it is understood, has ordered the Military Police to launch criminal investigations into 14 of the cases.

Yaakov Katz contributed to this report.