By GREER FAY CASHMAN
JANUARY 3, 2012 03:50
Dorit Beinisch, Peres_311
(photo credit: Marc Israel Sellem)
Advertisement
Barring any last minute addition to the judiciary, Dorit Beinisch attended her final swearing-in ceremony for 21 judges on Monday as president of the Supreme Court.Beinisch, the Court’s first woman president, is due to step down next month.RELATED:
‘Grunis Bill’ is now law The proportion of female judges among the new appointees was far lower than usual. Generally, when there is an uneven number of new judges, women number either one more or one less than the men.This time there were only seven women.Beinisch, however, pointed out that of 646 serving judges, more than half are women who serve in all branches of the judiciary. The new appointees will serve in district, magistrate’s, family and traffic courts.She added that they represent the demographic mosaic – in that the judges are men and women, Jews and Arabs, religious and secular.Referring to the effort by MKs to pass an amendment that would alter the composition of the Judges Selection Committee, Beinisch said that she hoped that the law would remain unchanged, and that first and foremost judges should be selected on the basis of professionalism and excellence. They should be autonomous and not dependent on anyone, she said. 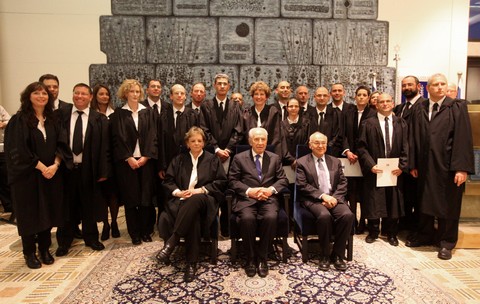 High court JusticesBeinisch also said that although the court, given its function, did not fulfill the role of a representative of the public, it certainly sat in the midst of its people and listened to what went on around it. “The Supreme Court does not sit in an ivory tower,” she maintained.As she has done at every swearing-in ceremony during the five-and-a-quarter years of her presidency, Beinisch exhorted the new judges to remember that every case represents a human being. She urged them to listen carefully to both sides before ruling.President Shimon Peres, who has often cited the democratically elected Hamas when warning of the dangers of abuse of a democratic system, took issue with those who he said sought to undermine the autonomy of the courts or cast doubt on the courts’ values.Such actions, he warned, could cause unprecedented political harm to the State of Israel. Judges should not have to function under the threat of the ruling administration or in the shadow of a political party. Their prime consideration should be upholding the law and judicial ethics.Peres also commented on the spate of new legislation that he said put democracy on shaky ground. It was wrong to enact laws for the greater glorification of the administration rather than for the sake of justice, he stated, even when such laws were enacted by a democratically elected body. To do so was to disrupt the democratic balance, he cautioned, adding that legislators were obligated to safeguard the spirit of democracy.Peres, who on several occasions has condemned those who humiliate women and young girls and strip them of their dignity, was again critical of such behavior and said that using force on buses to enable men to sit in the front and women in the back would not be tolerated.In the same breath, he said that not all members of the haredi community should be tarred with the same brush.The overwhelming majority of the community dissociated itself from violence and had said so in a loud and clear voice.Justice Minister Yaakov Neeman noted that the heavy backlog of cases, which has been bogging down the court system, is being gradually reduced. The contribution by 21 new judges to the hearings of cases would reduce the backlog even more, he said.Neeman joined Peres in condemning the recent acts of gender-related violence and said that equality was a Jewish value that found expression in the Book of Genesis.“We must not condone discrimination of any kind,” said Neeman, who deplores the nation’s growing divisiveness. “We have to do everything can to foster national unity.”
Advertisement
Subscribe for our daily newsletter