By JPOSTLEO GIOSUÈCOM STAFF, JOANNA PARASZCZUK
Schalit petition 311
(photo credit: Marc Israel Sellem)
Advertisement
The High Court of Justice began discussing petitions filed by the families of terror victims against the release of 1,027 Palestinian prisoners in exchange for Gilad Schalit on Monday. Presiding over the discussion, Supreme Court President Dorit Beinisch said the deal meant "the cancellation of legal decisions which established that these people should be behind bars.""The moral and legal difficulty is laid out before us...we are sitting among our own people. There is no need to explain the painful history and the very difficult dilemmas we face," Beinisch told the court.RELATED:Defense Ministry green lights prisoner transferGilad Schalit's release: The stage-by-stage timelineThe state on Monday asked the court to reject the petitions, saying the swap was strictly a political matter to be carried out by the government."The court has refused, time after time, to interfere with the release of prisoners as part of a deal reached through political negotiations," the state said."The decision was made after authorized professionals made a detailed examination of the request during negotiations," the state said."We sympathize with the pain of the families of the terror victims, but ask that the court not make any change, however small, to the deal made by the government," Schalit's parents, Noam and Aviva, wrote to the justices."Any delay, however small, will put Gilad's life in danger," the Schalits added. 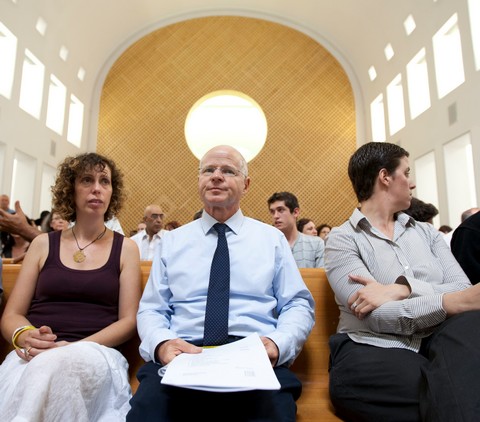 The first petition was filed by the Almagor Terror Victims Association on behalf of several bereaved family members of people killed in terror attacks carried out by the prisoners due to be released.The petition asks the court to delay the prisoner releases to allow bereaved families more time to examine the list of prisoners and to organize a response."Bereaved families are calling me all the time, they're asking me if the terrorists who murdered their family members are on the list of prisoners or not," Almagor CEO Meir Indor told The Jerusalem Post on Sunday.The petitioners include Yitzhak Maoz, whose daughter was murdered in the 2001 Sbarro bombing in Jerusalem; Hovav Nuriel, whose father Sasson Nuriel was murdered by a Hamas terror cell in 2005; the Bloom family, who were injured by a petrol bomb; Ron Karmal whose daughter was murdered in a bus bombing in Haifa; and Rabbi Shmuel Weiss, whose son died fighting terrorists.The Israel Prisons Service (IPS) on early Sunday morning published the list of the Palestinian prisoners slated for release in the first stage of the exchange deal. According to Israeli law, the government must provide citizens 48 hours to appeal the release of the prisoners.The first group of 477 prisoners, whose names were published Sunday, are expected to be released on Tuesday at the same time that Hamas hands over Schalit. The list includes 450 males and 27 females.