By MELANIE LIDMAN
Lifta fire 370
(photo credit: MELANIE LIDMAN)
Advertisement
Fires raged in the forest around Jerusalem on Tuesday, with the largest fire near the suburb of Motza. The Jerusalem-Tel Aviv highway was closed to traffic as fire and rescue services scrambled to control the blaze.Police evacuated the town of Ma'aleh Hachamisha, including the hotel, and Magen David Adom raised its alert level to the highest possible level. A total of 23 fire crews were battling the blaze from Jerusalem and Beit Shemesh, with reinforcements coming from central Israel. Some homes in Motza were evacuated and the fire was moving in the direction of Mevasseret Zion. 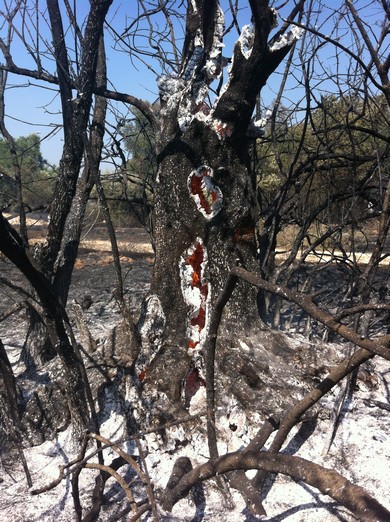 Embers burn inside a tree near Jerusalem (Photo: Seth Frantzman)
Israel's entire fleet of fire-fighting planes were being used to battle the blaze, Public Security Minister Yitzhak Aharonovich told Prime Minister Binyamin Netanyahu in a briefing on the matter.Earlier in the day, firefighters battled a large forest fire in the abandoned village of Lifta at the entrance to Jerusalem.Four firefighting crews were successfully bringing the blaze in Lifta under control within an hour, which was producing heavy smoke visible from the Begin Highway. 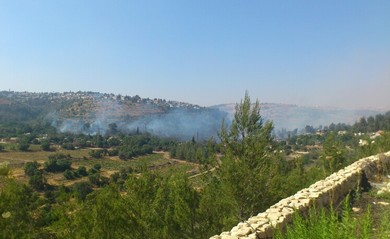 Smoke from forest fire outside Jerusalem (Photo: Marc Israel Sellem)
There were a number of separate origins of the fire, located next to an electricity distribution center.Jerusalem Fire and Rescue spokesman Asaf Abras said firefighters could hear "popping" noises coming from the electric company building area.Two caravans from the electric company were damaged in the fire.Jerusalem District fire chief Eli Peretz told Israel Radio that it was too soon to tell if arson was the cause of the fires.Seven people have been arrested in the past month for allegedly lighting fires in open areas. Abras said in the past two weeks firefighters have dealt with more than 200 cases of suspected arson in open areas and forests around Jerusalem.JPost.com staff contributed to this report.
Advertisement
Subscribe for our daily newsletter