Arsonist lights J'lem building with 50 foreign workers; firefighters: "This was a death trap, outcome could have been tragic."

By HERB KEINON
Anti-migrant spraypaint 370
(photo credit: Melanie Lidman)
Advertisement
The Foreign Ministry strongly condemned the arson of an apartment building in Jerusalem housing African migrants on Monday, a sign it is increasingly concerned the wave of anti-migrant feeling is impacting Israel’s image abroad and its relations with Africa.“There is no justification for such a heinous crime that puts people’s lives in harm’s way,” the ministry said in a statement.It is rare for the ministry to issue a statement about domestic developments, and one official said this is only done when internal events have international ramifications.The official said that, because of all the media attention surrounding the issue, it was turning into an “international incident.”He cited a US State Department report issued at the end of May on human rights practices that was critical of Israel’s treatment of the African migrants.The report negatively cited an interview Interior Minister Eli Yishai gave in December promising to make sure “that the last of the Sudanese, and the Eritreans, and all of the infiltrators, to the last of them, will return to their countries.” 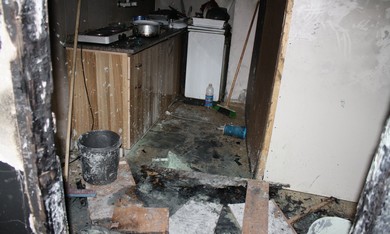 Fire damage on Jaffa street in Jerusalem.
“This issue is not winning us any points, not in the US or in Africa,” the official said. He said that none of the countries of origin of the migrants with whom Israel has relations – South Sudan, the Ivory Coast, Ghana, Eritrea and Ethiopia – have summoned Israel’s ambassador to protest. But, he said, it was causing discomfort in relationships that are strategically important for Israel.To halt the smuggling of Iranian arms into Sudan, and from there to Sinai and Gaza, Israel is especially interested in strong ties with an arc of countries in eastern Africa running through Eritrea, Ethiopia, Kenya, Uganda and South Sudan.Foreign Minister Avigdor Liberman, speaking at an accountants’ conference in Eilat, said the overheated rhetoric about the migrants – whom he characterized as seeking economic benefits, not political asylum – significantly set back Israel’s attempts to have them repatriated.“The Foreign Ministry is expending a great deal of energy to come to agreements with the countries of origin, and every headline and interview, and all the loud noise, sets us back half a year,” he said.Liberman called on his fellow ministers and on MKs to talk about the matter much less.“All the talking does not solve any problem,” he said.Liberman said the issue involved sensitivities and national honor and must be dealt with delicately.Although Liberman did not mention Yishai by name, Foreign Ministry sources said the ministry was furious with him for meeting Sunday with the Eritrean ambassador to impress upon him the need to stem the flow of migrants from his country.“Since when does Yishai meet with ambassadors?” one official said. “Is he now running his own foreign ministry?” While Monday was the first time the Foreign Ministry issued a statement about the anti-migrant wave, both President Shimon Peres and Prime Minister Binyamin Netanyahu, as well as other ministers, have spoken out strongly against it.“The issue of migrants and infiltrators from Africa is not a simple one and it requires the government to address it in the most serious and responsible manner,” the ministry statement said.“Together with other government branches, the Foreign Ministry is currently developing solutions to the various and complex aspects arising from this issue, in coordination with international parties.”The statement, written both in Hebrew and in English, said that “no person has the right to violate the law and resort to violence against others, certainly not to endanger lives, for any reason whatsoever. Law and ethics prohibit any injury to the other, the guest and the foreigner. Jewish history compels us to take exceptional caution on these matters.”
Advertisement
Subscribe for our daily newsletter

By ALIZA KLINE
Advertisement
Most Read
1