Pascal Avrahami, 49, is laid to rest at Mount Herzl in Jerusalem, had twice stopped terror attacks in the past.

By TOVAH LAZAROFF
Tal Avrahami at father Pascal's funeral 311
(photo credit: Tovah Lazaroff)
Advertisement
“My love for you is as big as the sky,” Sima Avrahami said on Friday, seconds before fainting as she eulogized her husband, Paskal, at the Mount Herzl Military Cemetery in the capital.The most veteran member of the Israel Police’s Counterterrorism Unit, Senior Warrant Officer Paskal Avrahami, 49, was killed in a firefight with terrorists near the Egyptian border north of Eilat on Thursday.He was one of eight Israelis killed in the triple attack.RELATED:
Click here for a timeline of the attack
Eilat terror victims laid to rest around country
PM: Killing PRC leadership only first response to attacks “You wouldn’t believe how many people came to your funeral,” Sima said as she looked out at the thousands of mourners crowded by the grave. “There was no one like you. You were unique. I will love you until the day I die and we meet in heaven.”After a few moments, her legs buckled. Her sons and friends kept her from falling.They handed her a water bottle and placed a plastic chair underneath her; she didn’t rise again to speak. 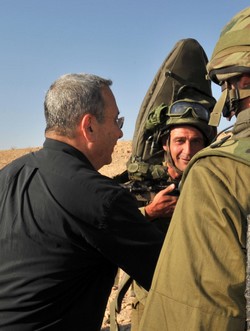 Friends and family eulogized Paskal for over half an hour, and commended him for his bravery during more than a quarter century of service with the police.“How the mighty have fallen,” a senior police officer said. “We are standing here with our heads bowed in pain and shock at the loss of the No. 1 fighter in the police.“Yesterday after hearing of the attack, you jumped to the scene with your friend. You did not stop to think, you did not ask, ‘Why me,’ you simply entered a helicopter and went to the site of the attack.“We all know that with your bravery you saved lives.You gave your life in defense of the country you so loved.It is not for nothing that you have a legendary reputation.”

Avrahami made aliya from France in 1977 and lived in the capital’s Pisgat Ze’ev neighborhood.He entered the police in 1985, excelled in everything he did and was often involved in dangerous situations, the senior police officer said. He was awarded medals of valor for stopping terrorist attacks, once in 1990 and again in 1995.“A generation of fighters have grown up listening to stories about you,” the officer said. “Those who didn’t know you wondered how it was that someone that old was still in the police.”Older members of the force who knew Avrahami said they would only retire one day after he did, the commander said.“You lived as a warrior, you died as a warrior. You were the pillar of fire at the head of the camp,” he said.Wearing a torn black Tshirt, Avrahami’s son Tal struggled to find the words to describe a father who he said was more heroic than any legendary figure in the movies.“My dear father, I do not believe I am writing to you. It is the first time I have written something you,” he said.“How do I even start?” Tal asked. “I will try to be strong now because I think that is what you would want me to do, but I am not sure that I will succeed.“We already miss you, your smile, your warm embrace, your eyes, the person that you were,” he said.“You can not imagine how hard it is to lose you, to think of passing each day without you. You were what strengthened us.“How can you be strong when the person you love is gone,” Tal asked. “Why does God always take the best? He doesn’t have enough good people with him?” He spoke of his father’s refusal to retire from the police.“Each year you said, ‘I’ll retire next year.’ But you never left. You stayed,” said Tal, as he explained that his father always downplayed his activities in the police to the family.“You always said nothing happened when you came back from work, but your voice said that it had,” Tal said. “You died the death of a hero.”Paskal’s father said that his son had not fallen, he had left.A half hour before they went into battle on Thursday evening, Paskal Avrahami and other members of his Counterterrorism Unit spoke with Defense Minister Ehud Barak near the site of the attacks.Jerusalem Mayor Nir Barkat, Public Security Minister Yitzhak Aharonovitch, acting French Ambassador Nicolas Roche and France’s Deputy Consul-General in Jerusalem Olivier Flanson attended the funeral.Avrahami is survived by his wife, three sons – Tal, 25, Matan, 20, and Ohad, 18, and his parents.