One Iranian writes: "We are 2 civilizations with more than 2,500 years of friendship. Why should I hate Israel?"

By BEN HARTMAN
MARCH 18, 2012 16:01
Man holding Israeli flag message to Iran 390
(photo credit: Facebook)
Advertisement
With the war drums between Israel and Iran beating at a fevered pace, an Israeli couple has launched an online campaign with the hope of reaching out on a personal level to the people of Iran.Ronny Edry, 41, said that he and his partner Michal Tamir, 35, both graduates of Bezalel Academy of Art and Design, created the poster campaign last Thursday on something of a lark, with no idea that within days it would take on a life of its own. 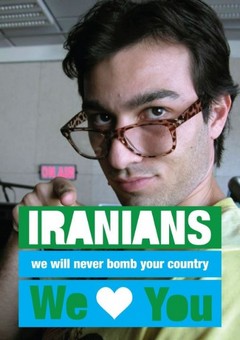 “The idea is very simple – to come and try to reach out to the other side and express the feeling that maybe [Iranians] think like me,” Edry said.“It’s to say from the beginning that ‘I love you’ and ‘I don’t want a war with you because I don’t know you.’” The “posters” uploaded to the Facebook page for Pushpin Mehina, a small preparatory school for graphic design students, are simple and their message is clear.They include pictures of Israelis – most of whom appear to be secular, goodlooking and healthy – above the slogan “Iranians, we will never bomb your country. We love you.”While the campaign may arguably have more kitsch than content, within 48 hours of posting the first picture Edry said he was receiving hundreds of messages from Iranians, many of them expressing gratitude for his efforts. In addition, some Iranians began making their own graphic designs expressing their love of Israelis and posting them on the group’s wall.When asked why he uploaded the posters, Edry said he wanted “to send a very clear message. Before they send us off to war, let’s see if there is someone against whom to fight.”“I’m trying to break the demonization in a very simple way,” Edry added. 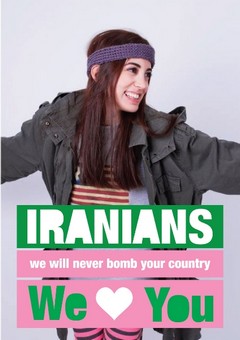 While there appears to be a shared sentiment of universal brotherhood among those posting on the Pushpin Mehina page, the overwhelming majority of those responding are Israelis. Most of the Iranians posting appear to be expatriates living abroad, mostly young English speakers far from the regime in Tehran. In the posters young Iranians uploaded to the site, which read “My Israeli friends – I don’t hate you, I don’t want war – Love, Peace” the subjects’ faces are either obscured or do not appear.The Iranian supporters of the campaign contacted by The Jerusalem Post on Sunday expressed their enthusiastic approval of such efforts, before asking that their real names and photos not be used.One respondent, “Nima,” a 24-year-old resident of Tehran, told the Post : “We want to spread our voices as people of Iran, that we respect all people with different beliefs and we want peace as much as you guys do.”Nima added that he believes the tension between the two countries “has nothing to do with the people of Israel and Iran, it’s just some stupid political games between the governments and not the people.”When asked if he thought such an online campaign could make a difference, Nima expressed his doubts. “Here in Iran, the government usually [doesn’t] care that much about what people want or need,” he said, but added that he is sure the campaign could put some smiles on people’s faces and diffuse some tensions.“Reza,” a native of Shiraz, said, “We are two civilizations with more than 2,500 years of friendship. For what reason should I hate Israel?” “We are not afraid of war but we will have no way to fight against brethren and friends from Israel. Brothers and sisters do not kill each other. If our governments think that we are fighting against each other, they should continue dreaming,” he added.Back in Israel, Edry said that he has no political affiliations whatsoever, although he is a supporter of “social causes” in the country. The Facebook page reflects this to some degree, featuring posters made to advertise courses in “designing and disseminating political messages” and pictures of Edry taking part in last summer’s social justice protests.Nonetheless, Edry said he created the posters as a citizen, with no nod to his political leanings.“In a war, you aren’t left or right – you are just a soldier,” he said. “I made this as a citizen, and as a citizen I turn to the other side and I say: ‘Do you know they’re planning a war? Maybe you don’t feel like it, neither do I.’”
Advertisement
Subscribe for our daily newsletter