By HERB KEINON
JANUARY 10, 2011 20:07
Netanyahu's tlush pay stub salary 521
(photo credit: Courtesy)
Advertisement
For the privilege of carrying the weight and fate of the Jewish people on his shoulders, Prime Minister Binyamin Netanyahu deposits a whopping NIS 15,027.43 into his bank account each month, according to a copy of Netanyahu's monthly pay slip placed on his Facebook page Monday.The Prime Minister grosses NIS 43,952.29 a month, and pays NIS 24,445.82 in various taxes. Granted, he gets free housing, transportation and business trips to various exotic locales, but this monthly gross puts him way behind some of his peers.For instance, according to information gleaned from the public record and provided by the PMO, Swedish Prime Minister Fredrik Reinfeldt grosses the euro equivalent of NIS 64,703 a month, German Chancellor Angela Merkel makes the equivalent of NIS 68,825.20, and French President Nicolas Sarkozy gets a monthly pay slip that is worth 89,327.01 in shekels.A source in the Prime Minister's Office said the decision to make Netanyahu's monthly pay slip public came out of desire to provide "full government transparency." An 2010 Economist chart circulated by the PMO put Netanyahu's annual salary at $120,814, number 16 on a list of salaries of the leaders of some 22 countries. 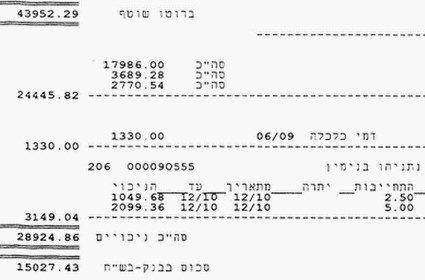