Netanyahu praises heroism of Carmel Fire victims in ceremony marking year since disaster; Rivlin: We were not prepared.

By JPOST.COM STAFF
DECEMBER 19, 2011 15:40
PM Netanyahu at Carmel Fire memorial 311
(photo credit: Moshe Milner / GPO)
Advertisement
Prime Minister Binyamin Netanyahu on Monday that since Carmel Fire which claimed 44 lives, "we are doing everything we can in order to make sure we can fight giant fires more diligently in the future." Netanyahu was speaking at a ceremony marking the one-year anniversary of the disaster. A memorial in honor of the fire's victims was inaugurated during the ceremony at Kibbutz Beit OrenRELATED:
For rescuers, effects of Carmel Fire linger on
Fire Service commissioner: We built new organizationSpeaking to the families of those who lost loved ones in the blaze, Netanyahu said that "partial relief can be found in the legacy of heroism that the victims left behind.""This memorial will serve as eternal evidence of their heroism," he stated.Interior Minister Eli Yishai, Knesset Speaker Reuven Rivlin, Public Security Minster Yitzhak Aharonovitch and by the families who lost loved ones in the blaze also attended the ceremony. 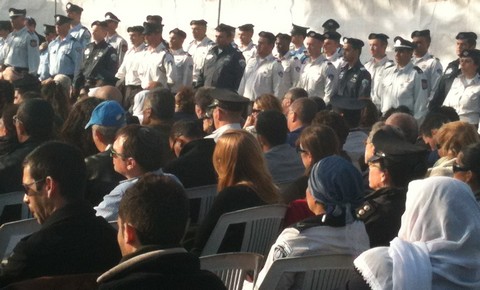 Two firemen and a 16-year-old volunteer died battling the blaze, as well as three senior police officers assisting in rescue efforts. In addition, 36 Prisons Service cadets, their commander and their driver, were burned alive in a bus.The fire also caused widespread damage to land and property, totaling millions of shekels. An estimated 1.5 million trees were destroyed in the fire.Rivlin said that Israel was ready for any enemy but "neglected one front for 63 years," referring to the failure of the fire services to stop the blaze from spreading."The State of Israel was caught unprepared with a faulty firefighting service," Rivlin stated.Rivlin said that Israel must work to reform the firefighting service so that such a tragedy does not occur again.Aharonovitch vowed to "not relax" in the mission to build a strong and able fire service.Police had suspected that two youths aged 13 and 14 from the Druse Usfiya village near Haifa had deliberately caused the blaze last December, but the case against them was closed last month due to lack of sufficient evidence.The government faced harsh criticism in the aftermath of the fire for contributing to a lack of preparedness that allowed the blaze to spread out of control.State Comptroller Micha Lindenstrauss has warned several times that he is working on a report on the fire that will reveal serious negligence on the part of several of the organizations investigated in connection with the tragedy.A source close to the investigation into the fire said that the draft report criticizes Yishai, Finance Minister Yuval Steinitz, Aharonovich and Netanyahu for ignoring problems even though they had enough time to realize that the Fire Services were not able to deal with large fires.Yaakov Lappin and Joanna Paraszcuk contributed to this report.
Advertisement
Subscribe for our daily newsletter