By MELANIE LIDMAN
Malha Mall anti-racism protest_390
(photo credit: Marc Israel Sellem/The Jerusalem Post)
Advertisement
More than 150 people braved an unseasonably cold spring night at an anti-racism rally on Wednesday outside the Malha Mall to express their disgust at a riot last week when Betar Jerusalem soccer fans attacked Arab cleaners. Last Monday after a game, more than 300 fans poured into the food court at the mall and chanted “Death to Arabs!” and “Muhammad is dead!” and attacked a number of cleaners.“We won’t allow people who suffered pogroms perpetrate pogroms on another nation,” Deputy Mayor Pepe Alalu (Meretz) told the crowd. “As soon as I heard, I was horrified,” city councilor Laura Wharton, also from Meretz, told The Jerusalem Post.“It was clear to me there had to be some response both to the violence itself and the racism, and also to the very disappointing response of the police, who were slow in coming and also didn’t detain a single one of the people who went on a rampage,” she said.The protest was organized by the Tag Meir (bright tag) organization, an umbrella group of activists dedicated to stopping racism and sexism in Israeli society Wharton called on the police to make an example of the fans they arrest by giving them strong punishments or even jail time. Police detained two Betar fans for questioning after the protest on suspicion of provoking the demonstrators. 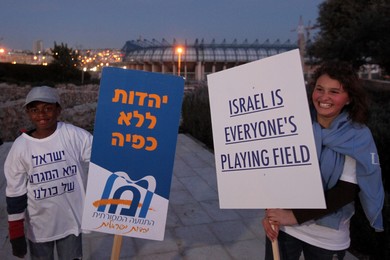 Anti-racism demo at Malha Mall (Marc Israel Sellem)
On Sunday, six days after the riot and after widespread public outcry, police announced that they were starting an investigation. An Arab cleaner at the food court said on Wednesday that it took over an hour for police to arrive after they were called during the riot. Jerusalem Police spokeswoman Shlomit Bajshi said no arrests were made because by the time police arrived, the rioters had dispersed.“Every game it’s like this,” said A., who has worked as a cleaner at Malha for 10 years. “Every time, they chant ‘Death to Arabs,’ but this time was different.”A. said he expected there to be similar problems after future games but he refused to be afraid because this was his job. He warned that the next time it would end in broken bones or serious injury.After the protest, demonstrators handed out white lilies to the Arab cleaners in the food court as a token of their support. A 16-year-old Betar fan wearing the team’s scarf around his neck tried to claim that the Arab workers attacked him, but he was widely ignored.“I want to personally apologize,” Osnat Kollek, daughter of Teddy Kollek, told the crowd outside the mall. “My father built this land, he was a student of Theodore Herzl and he wanted Jerusalem to be a light to the nations and a capital of culture. If he saw what went on last week, he would also personally apologize. This is not the city he envisioned.”
Advertisement
Subscribe for our daily newsletter