Social justice activist sets himself on fire in TA

By YAAKOV LAPPIN, MICHAEL OMER-MAN, Gil Stern Stern SHEFLER
JULY 14, 2012 22:46
Social justice protesters 370
(photo credit: Michael Omer-Man)
Advertisement
A man set himself on fire on Tel Aviv’s Kaplan Street during a social justice rally on Saturday night, police said.The Haifa man identified as Moshe Silman, 46 years old, came out of an apartment building, poured flammable material over his clothes and body and lit himself with a burning object.Other protesters threw water on him in an effort to douse the flames.Paramedics rushed him to the Ichilov Medical Center in serious condition, police spokesman Micky Rosenfeld said. The man suffered second- and third-degree burns all over his body and was in serious condition, one paramedic said.
Before setting himself on fire, Silman handed out copies of a letter in which he blamed Prime Minister Binyamin Netanyahu and Finance Minister Yuval Steinitz for his economic hardships.Describing them as villains, Silman said he received no rent assistance despite suffering a stroke recently and no longer being able to work at all.He went on to name officials at the Housing Ministry and the National Insurance Institute who he said made his life impossible. Eventually, the letter said, he received NIS 2,300 a month in disability benefits, from which he must pay for health insurance and buy medicines. 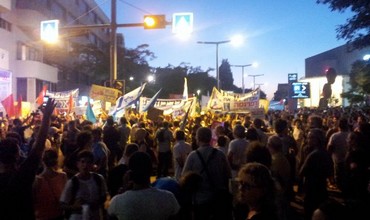 “I have no money for medicine or rent... I served in the army, and until the age of 46 I served in the reserves,” the letter read. “I will not be homeless, that’s why I’m protesting against all the injustices done to me and those like me by the state.In the otherwise low-key protest, nearly 10,000 people marched through the streets of Tel Aviv on Saturday evening to mark one year since protest leader Daphni Leef set up her tent on Rothschild Boulevard, kicking off last summer’s social justice protest movement. 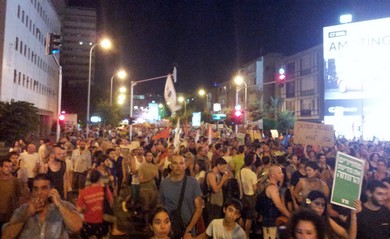 Protesters march down Kaplan Street (Michael Omer-Man)Marching from Habimah Square to the government offices on Kaplan Street, protesters filled the streets with the same chants demanding social justice and the return of the welfare state as those of the year before.Signs and chants called on Prime Minister Binyamin Netanyahu to resign, calling the government corrupt.But save for a few signs from Meretz and communist parties, protesters made it clear that they were not entirely welcoming even of socially left-leaning politicians.“Bibi, Shelly, it’s the same revolution,” demonstrators chanted, referring to Labor chairwoman Shelly Yechimovich.Though the demonstration lacked the large stages and organized speeches of previous protests, speakers’ corners popped up along Kaplan Street as the march came to an end.While some protesters preached about equality not only in military service but also in human rights, gender issues and those regarding sexual orientation, others appeared to have a more personal message.Telling a thin crowd how he received a parking ticket that morning while visiting the beach, one soap-box speaker who did not want to identify himself called on his audience to “go out and steal back [from the state]” the next morning.Meanwhile, about 150 protesters bearing signs calling for social justice and more government spending in the periphery marched down the emptied Tel Aviv promenade from north to south on Saturday night.Organizers of the gathering, which aimed to be an alternative to the larger demonstration that was taking place at the same time at Rabin Square, said they set up a separate protest because they believed the other event had become politicized.“The social justice movement has succeeded in gaining the attention of the public, but some conflicts within the leadership of the movement occurred, which is why we are here,” said Rahum Herzl, of Nahariya, who was one of the organizers.“Right now, for instance, there is a protest in Haifa organized by Hadash,” a Jewish-Arab socialist party.Rahum accused Leef and other icons of the social protests of having a concealed political agenda.“They are dependent on political parties and sponsors and we are not,” he said while directing the marchers down the promenade.Policemen lined the cordoned streets waiting for the small group of marchers to pass on their way to Jaffa.In Jerusalem, some 500 people marched from Menorah Park (Horse Park) toward the Prime Minister’s Residence.Some demonstrators expressed disappointment there was such a low turnout for the year anniversary since the beginning of the protest.“It’s really sad but it’s exam period and people are exhausted,” said Roni Parparoni, a history major at Hebrew University. “They think there are enough stronger people that will yell about their rights,” she added.The protesters marched on the sidewalk of Jerusalem’s King George Avenue because police did not give them a permit to block the street.“I am scared I am living in a state that is becoming more fascist,” said Anat Yatziv, a medical school student.“Last year, we could be on the roads. In a democratic state, how can you not give a permit for a demonstration?” Protests also took place in Haifa and Beersheba.Leef and other activists demonstrated in Bnei Brak on Thursday night and called on the haredi (ultra- Orthodox) public to join the protest against the cost of living.“Haredim and secular people refuse to be enemies,” the social justice protesters chanted.Melanie Lidman and Hadas Parush contributed to this report.
Advertisement
Subscribe for our daily newsletter