By TAMARA ZIEVE, JPOST.COM STAFF
Participants in TA Human Rights March 370
(photo credit: Ben Hartman)
Advertisement
Thousands of human rights activists took to the streets of Tel Aviv to participate in the fourth annual Human Rights March on Friday, ahead of International Human Rights Day on Monday.Demonstrators marched from Habimah Square to nearby Rabin Square, where a live concert was put on following several speeches in both Hebrew and Arabic.Banners included slogans reading “Human beings live in Gaza, just like in Sderot,” “Bibi is isolating me,” “Stop the occupation,” and “Human beings refuse to be enemies.” 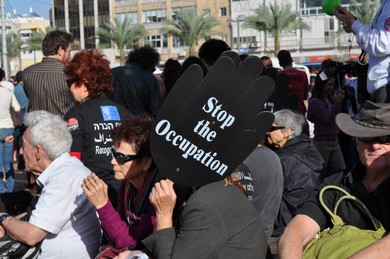 Photo: Tamra ZieveA handful of right-wing activists trailed behind the demonstrators in a counter protest holding banners reading: “no loyalty, no citizenship.”One man at the concert at Rabin Square was wearing a “Kahane was right” T-shirt and was ushered away by police.Association for Civil Rights in Israel President Sami Michael addressed the crowd, using much of his speech to bring attention to discrimination, violence and rights violations against women.“Billions are invested in national defense, but very little is in invested in defending women who on a daily basis face oppression, harassment, violence and murder,” Michael said.“Discrimination against women means that society loses out on their enormous and blessed contribution,” he added.A number of leftist political factions, including Meretz, Da’am and Hadash were all represented at the march alongside numerous human rights and peace organizations.Event organizers arranged buses to bring participants from throughout the country to the march.Hadash MK Dov Henin described the event as “a different type of politics, of values and cooperation, which is the answer to the great damage [done to] faith in democracy.”Shiran Yosef, 28, from Ramat Gan, told The Jerusalem Post that for many people peace has become an empty slogan, but she believes it can be achieved through empathy.“No one is going anywhere,” she said, referring to both sides of the Palestinian- Israeli conflict, stressing that “we are all victims, so there is no point dwelling on history. Instead we must look to the future.”Meretz supporter Ran Kraus said it was important for people to come out of their houses and show their support “because the situation is deteriorating.”When asked whether he identified with any specific cause he said that the issues could not be separated. “Each one is connected to the next.”The concert included performances by Shlomi Saranga with Boom Pam, Noam Rotem, Miriam Tukan, Rami Danoch, Bilaka and Ester Rada.